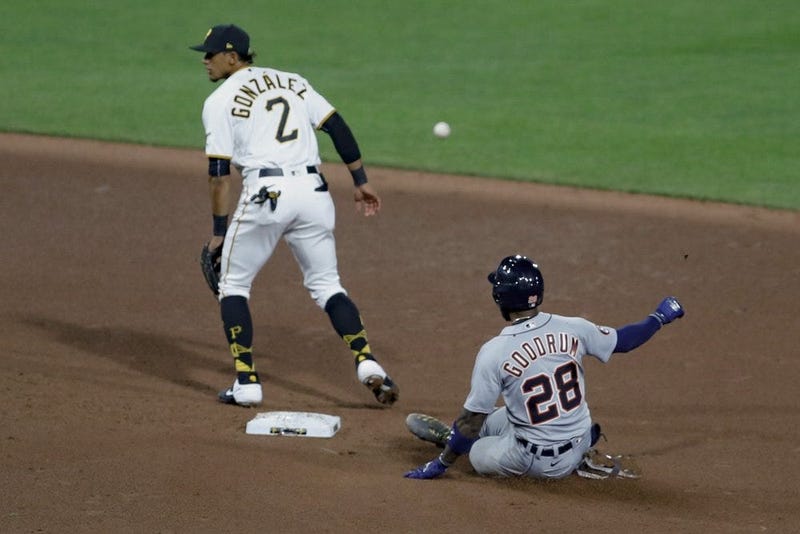 PITTSBURGH (AP) — Niko Goodrum drove in five runs, two on a double in a big 11th inning that sent the Detroit Tigers over the Pittsburgh Pirates 17-13 in a startling slugfest on Friday night.

Both teams finished with 16 hits, surprising since each club had four players in the starting lineup batting under .190. Those numbers soon changed as Detroit played its first game in five days.

Erik Gonzalez, batting ninth for the Pirates, drove in six runs. He homered, doubled and singled twice as Pittsburgh lost for the eighth time in nine games and fell to 3-11, the worst record in the majors.

It was 12-all after nine innings and Jeimer Candelario broke a 13-all tie with an RBI single in the 11th. Austin Romine singled home another run and Goodrum capped the inning with his line drive to right field.

Candelario finished with three hits and three RBIs as Detroit improved to 6-5, a year after its 47-114 record was the worst in the major leagues.

The Tigers returned to action for the first time since Sunday after their four-game series with St. Louis earlier in the week was postponed because of the Cardinals’ COVID-19 outbreak.

Pittsburgh was down 12-9 in the ninth with two outs and none on, but came back on Adam Frazier’s tying homer.

In the top half of the 10th, JaCoby Jones delivered an RBI single with two outs. Cole Tucker countered with a sacrifice fly in the bottom half when the Pirates left runners on first and second.

Rookie Bryan Garcia (2-0) got the win despite giving up the 10th-inning run. Dovydas Neverauskas (0-2) allowed all four runs in the 11th.

Pirates starter Chad Kuhl allowed only one run and one hit – a leadoff homer by C.J. Cron in the second – in four innings with seven strikeouts. He made his first start since June 2018 — heunderwent Tommy John elbow surgery three months later.

Tigers starter Matthew Boyd was tagged for seven runs and eight hits in 4 2/3 innings. He left after giving up Phillip Evans’ three-run homer that put the Pirates back ahead 7-5 in the fifth.

The Pirates are supposed to visit St. Louis for a three-game series beginning Monday night. That series could be in jeopardy considering the Cardinals have had their third straight series postponed Friday by Major League Baseball because of virus concerns.

“It’s something we’ve thought about, obviously, but aren’t dwelling on it,” Pirates manager Derek Shelton said.

Shelton was ejected in the seventh inning by home plate umpire Ramon De Jesus for arguing balls and strikes. Shelton and De Jesus had a heated discussion at an appropriate social distance with both wearing masks.

INF Jordy Mercer elected free agency after clearing waivers following the Tigers’ attempt to outright him to their alternate training camp in Toledo, Ohio. The nine-year veteran went 2 for 9 in three games this season.

LHP Robbie Erlin, who was designated for assignment by the Pirates earlier in the week, was claimed off waivers by the Atlanta Braves.

Pirates: RHP Keone Kela will throw live batting practice for the first time Saturday. The closer has been sidelined since the beginning of summer camp after testing positive for COVID-19.