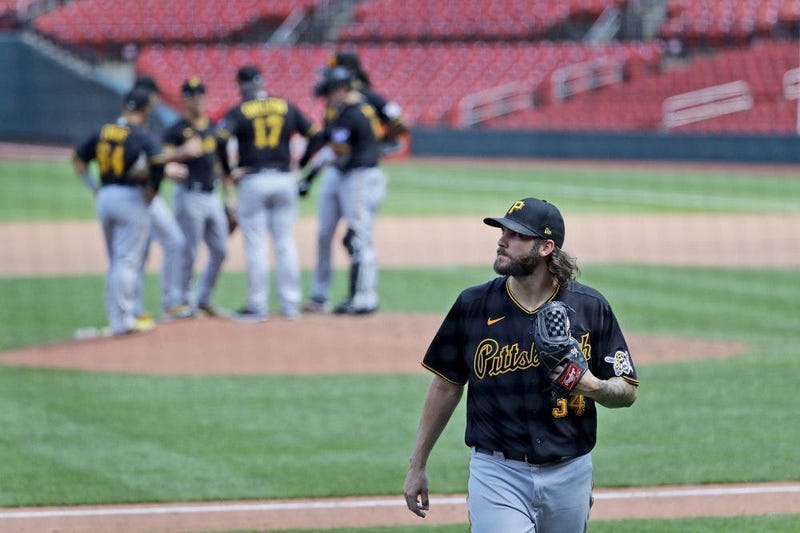 Wainwright (1-0) pitched out of a bases loaded, no-out jam in the second, giving up just one run. He retired 14 of the final 15 batters he faced as the Cardinals beat the Pirates for the 12 time in their last 13 games.

Wainwright’s 163rd career victory moved him into a tie with Bob Forsch for third-most wins in Cardinals history.

Wainwright continued his dominance against Pittsburgh at Busch Stadium, where he hasn’t dropped a decision to the Pirates since June 29, 2012. He has pitched at least five innings in all 19 career home starts against the Bucs.

Dexter Fowler and Tyler O’Neill broke a 1-all tie with RBI singles in the fourth inning.

Paul DeJong’s two-run single in the seventh gave him four RBIs through the season’s first two games. Matt Carpenter followed with a two-run double that broke the game open.

With his two-run triple in the eighth, Tommy Edman has now hit safely in 20 consecutive games dating back to Sept. 10, 2019.

Pirates starter Trevor Williams (0-1) gave up three runs in 4 2/3 innings. He gave up just two runs in two starts all last season against the Cardinals.

Goldschmidt’s 381-foot solo homer gave the Cardinals a 1-0 lead in the first. He has hit safely in 11 of 12 home games against Pittsburgh since joining St. Louis.

It was the 266th time Yadier Molina has caught a Wainwright start, the most for a duo in Cardinals history and seventh-most in Major League History (since 1908).

Pirates: OF Gregory Polanco (COVID-19) passed all return protocols and worked out at PNC Ballpark. There is no timetable on his return.

Cardinals: RHP Giovanny Gallegos showed more consistency with his pitches during live batting practice. He will throw another BP round on Sunday.

The Pirates send RHP Mitch Keller (1-5, 7.13 ERA in 2019) to the mound against the Cardinals and RHP Dakota Hudson (16-7, 3.35 ERA in 2019) in the finale of a three-game series on Sunday. Keller, who has never faced St. Louis, entered the season as the team’s top pitching prospect. Hudson has won his last five starts against NL Central foes, including one against Pittsburgh on July 23, 2019.