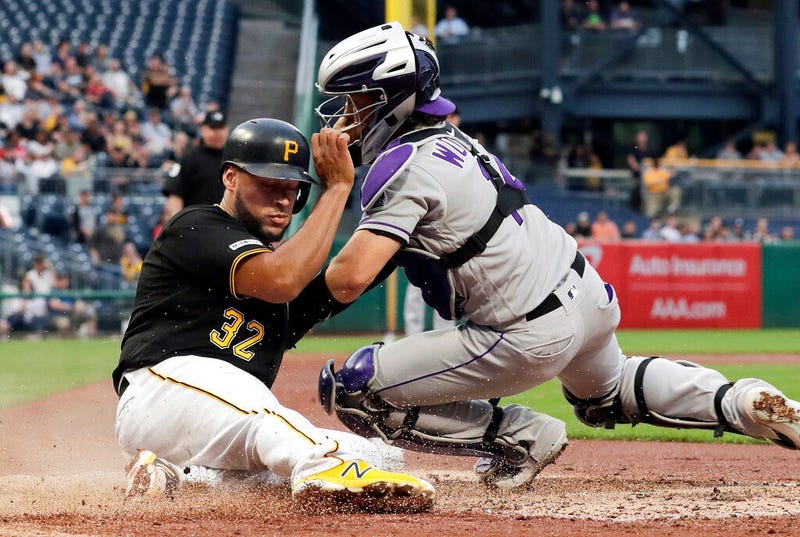 PITTSBURGH (AP) — Another feat of strength from Josh Bell didn't do the Pittsburgh Pirates much good Wednesday night.

For the second time in two weeks, the switch-hitting slugger homered into the Allegheny River on the fly. Before then, only three balls had splashed into the river without bouncing since PNC Park opened in 2001.

The 454-foot drive with an exit velocity of 116 mph sent a buzz through the crowd, but netted just one run in the second inning of a 9-3 loss to the Colorado Rockies. It was reminiscent of May 8, when Bell hit a ball 472 feet into the water during a 9-6 loss to Texas.

"I was selling out over there tonight," Bell said. "I figured (Rockies starter Jon Gray) would kind of attack that way. It worked out in my favor."

Bell hit his 15th homer in 46 games after finishing with 12 last season, but Daniel Murphy and Tony Wolters outdid him with three-run shots in the first three innings for Colorado.

Murphy's homer put Colorado ahead 3-0 in the first inning before Bell's titanic drive and a double from Kevin Newman cut it to 3-2 in the second. That ended the only sustained pressure against Gray (4-4), who went seven innings for the second time in 10 starts this year. He gave up three runs and seven hits with seven strikeouts.

Gray struck out Bell on three pitches in their second matchup, getting him to chase a curveball dipping out of the zone with an awkward swing leading off the fourth.

"It was another at-bat in another inning until I got to two strikes," Gray said. "Then I was kind of like, I'm going to pitch you away. I'm not going to make any mistakes here. So get ready to hit the best thing I got."

"There's work to be done (with Kingham)," Pittsburgh manager Clint Hurdle said. "We've seen better. We haven't seen as good lately. ... It's at a point now where he wants better, too."

Wolters broke the game open with his three-run homer with two outs in the third, extending the lead to 6-2. It was his first long ball since Aug. 27 last year.

"I'm just trying to have good at-bats," Wolters said. "I think the main thing is staying in my zone, not going out of my zone."

Brendan Rodgers doubled, and Charlie Blackmon and Raimel Tapia each singled to help tack on another three runs in the fifth.

Pittsburgh got a third run when Bryan Reynolds grounded into a fielder's choice to score Gregory Polanco in the sixth.

Pirates: RHP Keone Kela threw 21 pitches, mixing his fastball and curve, during a simulated game, Hurdle said. Kela hasn't pitched since May 4 because of shoulder inflammation. ... Polanco returned to the lineup after missing Pittsburgh's 5-0 loss Tuesday with finger discomfort in his left hand sustained against San Diego on Sunday.

Rockies: RHP Antonio Senzatela (3-3, 4.89 ERA) will try to pitch Colorado to a series sweep Thursday. He's lasted more than five innings once in his past four starts, but allowed two runs (one earned) in five innings of a 2-1 loss to Philadelphia last time out.

Pirates: RHP Jordan Lyles (4-1, 1.97) has permitted one run or fewer in six of his first eight starts this season, including each of his past three.