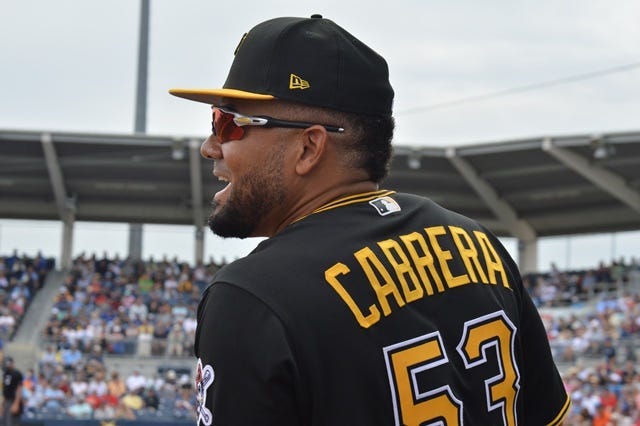 BRADENTON, FL (93.7 the Fan) – With the weeks dwindling into days and now into hours the Pirates still have to figure out their bench.

If healthy, Jacob Stallings will be the back-up catcher, Colin Moran will be a back-up third and first baseman.  Then there is still a group, it’s headed by veteran Melky Cabrera and Kevin Newman after losing out at the job at short.

Newman seems logical to stay because he’s had a good spring and they want Cole Tucker to play every day at short at AAA.

Here is a look at the other candidates...

“You are talking about a consummate professional,” said manager Clint Hurdle.  “If you follow him daily, his energy, effort and focus is still top shelf.”

Hurdle said while they did experiment with Cabrera in center, that won’t happen in a real game and his foot speed would keep him out of left field at home.  Hurdle said he could play left and right on the road.

“The ability to be a pinch-hitter off the bench and switch-hit, is very attractive,” Hurdle said.  “The experience for all of our players is also something he’s brought to every club.  I talked to his manager last year, Terry Francona, at length, and Terry wanted him back, loved him.  Every manager he’s played for has spoken glowingly about him.”

The 25 year-old is being groomed as the next super utility player.  In 18 games with the Pirates last year, Reyes hit .293 with three homers and seven RBI.  The righty hitter also had four straight multi-hit games in the big leagues last year.

“I feel comfortable because every day during practice, I take ground ball,” Reyes said.  “I take fly balls.  Outfield, infield, I know I have to be ready because I’m the utility guy.”

Reyes hopes he can use this role to eventually get an everyday position like Josh Harrison and Adam Frazier before him.

“First time he ever played right field was in the big leagues<” hurdle said.  “you saw how he played out there at the major league level, which is more that we could have asked for.  sent him over to left field, same p>

“The bat is real,” Hurdle added.  “He gets his swing off at the plate and he goes up there with bad intentions and still has usable speed on the bases.  We like the ballplayer.”

The lefty-hitting outfielder said he got a quick start with the Pirates because he worked with now Bucs hitting coach Rick Eckstein at Anaheim.  Shuck has played with five different teams in the majors with a career .244 average with 24 stolen bases in 434 games.

“Hopefully I’ve proven I can help out,” the 31-year-old Shuck said.  “I think I’ve swung the bat fairly well, played good defense.  Hopefully I can show I can run the bases like I can and hopefully it’s enough.”

“Gamer, edge, energy, can play all three outfield positions,” Hurdle said.  “Probably has had a good a spring as anybody.  You see him get down the line as good as anybody you’ll watch in the Grapefruit League.  He can steal a base, so he’s been a good player to get.”

“You don’t really see it as a competition,” said Shuck, who also happens to be the brother-in low of former Pirates closer Mark Melancon.  “At least I try not to.  I root for everyone in here, especially the outfield group.  The guys your competing with, those are the guys I talk to every day.  We don’t really see it as we are competing against each other, see it as more that we push each other every day.”

“We were aggressive after him as a minor-league free agent over the winter,” Hurdle said.  “Right-handed guy, some physicality to him, aggressive, plays with an edge, hard-nosed baseball player.  Some right-handed power has hit some left-handed pitching and gotten the ball in the air.”

The 29-year-old has a pretty unique background. Kivlehan played football at Rutgers for four years and then played baseball his senior season.  In that one year of college baseball, Kivlehan was the Big East Player of the Year and the first in league history to win the Triple Crown.

Kivlehan is hoping this versatility is enough to make his fourth different big league roster.

“Kind of always been my thing the last couple of years, coming up a third baseman, then jumping to first and then going to the outfield,” Kivlehan said.  “The last two or three years I’ve really jumped around a bunch and think it adds some versatility.  A different style that maybe will play, maybe it won’t.  We’ll see.”

“Finish strong, control what you can control, there are so many variables and outside noise and distractions that can get in your head.  We will see what happens.”