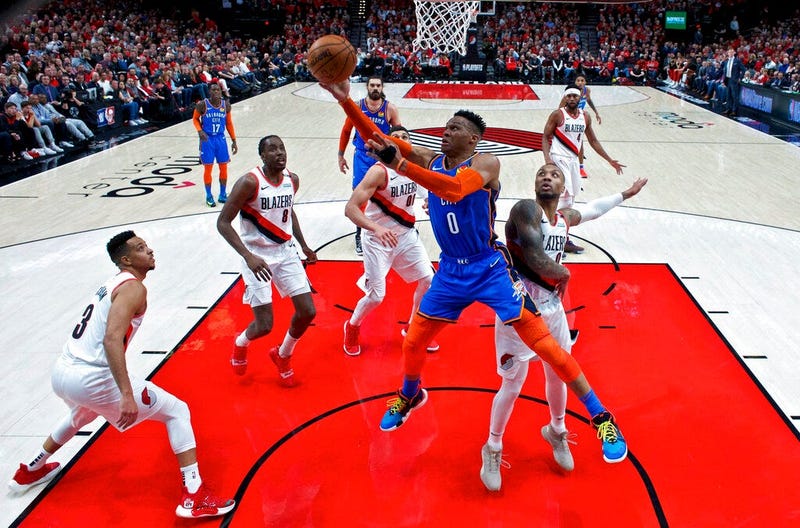 PORTLAND, Ore. (AP) — CJ McCollum had 33 points, Damian Lillard added 29 and the Portland Trail Blazers took a 2-0 lead in their first-round playoff series against the Oklahoma City Thunder with a 114-94 victory on Tuesday night.

Maurice Harkless added 14 points and nine rebounds for the third-seeded Blazers, who opened a playoff series with two wins for the first time since the 2014 playoffs, when they beat Houston in six games.

The series shifts to Oklahoma City for Game 3 on Friday.

"Now we've got to go on the road and get gritty," McCollum said.

Russell Westbrook, who had his ninth career postseason triple-double in Oklahoma City's Game 1 loss, finished with 14 points, eight rebounds and 11 assists. He was pulled with 3:31 with most of his fellow starters after Portland built a 112-91 lead.

Paul George had 27 points despite lingering questions about his right shoulder, which was covered with kinesiology tape. George insisted the shoulder, which kept him out of the Thunders' regular-season finale, was fine at practice on Monday even though it was wrapped in ice.

The Blazers were up 91-75 after three and easily protected their lead in the fourth, with Seth Curry's 3-pointer pushing the lead to 100-83.

Portland's victory in Game 1 snapped a 10-game postseason losing streak that included four-game sweeps in the past two seasons — first by the Warriors and then last year by the Pelicans. Lillard had 30 points in the 104-99 win on Sunday.

Oklahoma City beat the Blazers in all four meetings during the regular season. The Thunder have been to the playoffs for eight of the last nine seasons, but they haven't gotten past the opening round for the past two.

Oklahoma City started with a lot more energy than in Game 1, when it fell behind by 19 points in the first half. When Westbrook hit a 3-pointer in the first quarter, he pounded his chest and the Thunder went on to lead 31-26 at the end of the quarter.

Lillard hit a 3-pointer and was fouled to close the Blazers within 48-43. But the game began to get heated, with Lillard and Westbrook getting into it when Lillard tried to strip the ball. The officials reviewed it for a "hostile act" but concluded there were no fouls on the play. There was tension the rest of the way, and frequent jawing back-and-forth.

Westbrook collected three fouls in the half and headed early to the bench, as did Portland's Enes Kanter, who was so successful against the Thunder in Game 1. Together the teams had 29 fouls in the opening half.

McCollum nailed a 3-pointer off a pass from Lillard at the buzzer to tie the game at 54 going into the break. Then McCollum turned to the crowd and simply nodded.

Portland pulled in front on McCollum's jumper and extended it to 69-63 with Lillard's long 3-pointer. Curry had back-to-back 3s to put the Blazers up 85-73 late in the third.

The Blazers' hopes for postseason success appeared to take a blow last month when center Jusuf Nurkic was lost for the season with a broken left leg. Nurkic was averaging 15.6 points and 10.4 rebounds when he sustained the gruesome injury during a game against the Brooklyn Nets.

Kanter, signed just before the All-Star break after he was waived by the New York Knicks, has started in Nurkic's place. Kanter had 20 points and 18 rebounds in Game 1 but finished with six points and five rebounds on Tuesday.

Thunder: Thunder coach Billy Donovan was emphatic before the game: "No injuries, no one out, no game-time decisions." ... It's the first playoff series between the teams since the Thunder moved from Seattle to Oklahoma City.

Trail Blazers: Seattle Seahawks quarterback Russell Wilson, who just signed a contract extension that makes him the highest paid player in the NFL, was among the fans at the Moda Center, as was Gonzaga coach Mark Few. ... Jake Layman, who did not play in the series opener, came in to start the second quarter.

UP NEXT: Game 3 is set for Friday night in Oklahoma City.