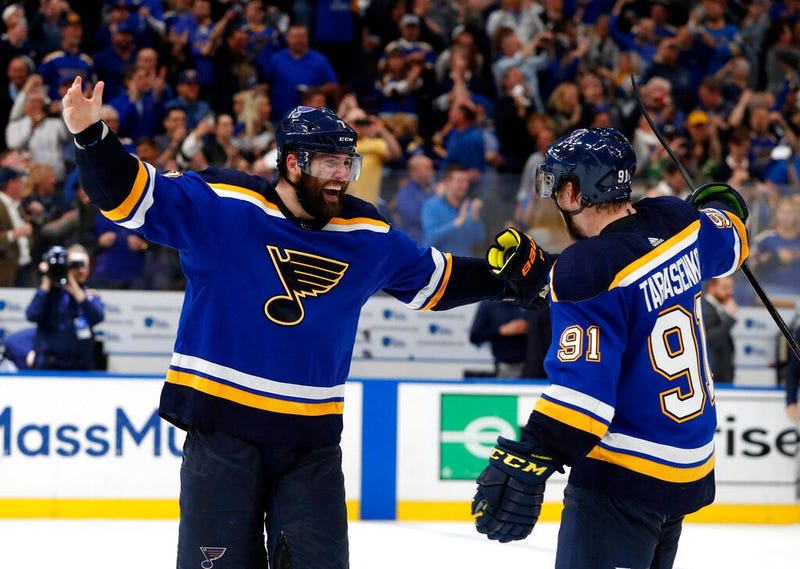 ST. LOUIS (AP) — Each morning Anthony Maroon woke up during a visit to see his father, he'd ask his grandmother how many days he had left with him.

The goodbyes were brutal. Patti Maroon told her grandson she couldn't guarantee she wouldn't cry, but she'd try.

By the last day, she had to wear sunglasses to keep Anthony from seeing the tears in her eyes. Then they'd pull up to the airport and Anthony would scream, "I want my daddy!"

"It was heart wrenching," Patti said.

Patrick Maroon played his first eight NHL seasons away from his son, who lived with his mother in suburban St. Louis. When he was a free agent last summer, the interest from teams on a long-term contract didn't materialize, but he had a more lucrative offer from the New Jersey Devils and a multiyear offer from the San Jose Sharks to weigh against a deal for $1.75 million with the St. Louis Blues for just this season.

He agonized over the decision and ultimately took less, betting on himself to play for his hometown team in front of his son and surrounded by his tightknit family. After a rough start to the season for him, Maroon helped the Blues make the playoffs, scored the double-overtime series-clinching goal in Game 7 of the second round against Dallas and is now in the Stanley Cup Final with the team he always yearned to play for.

"It's meant the world to me," Maroon said. "As a kid, you dream of this your whole life and to come back home and play for your team you grew up watching your whole life, and to actually live out your dream and actually put your skates on and play (in) the Stanley Cup finals, it's a pretty cool moment for me. Not only a cool moment for me, but my dad that's been a season-ticket holder and Blues fan, my mom, my family, my son. It's been really cool and very special: A lot of highs, a lot of lows, but we're getting through this together."

There was the criticism for taking the No. 7 Keith Tkachuk wore, jeers in the stands his parents had to hear, sessions with a sports psychologist, a franchise-record 11-game winning streak, the death of his grandfather the day before the playoffs began, his game-winning assist in the postseason opener, his overtime heroics and an emotional meeting with his family after moving on to the Cup Final.

Those are some significant highs and lows. Now Maroon is on the ultimate high playing for the Blues against the Boston Bruins for the Stanley Cup — a playoff run that has given his family a reason to come together to watch his games at an emotionally difficult time, and none of it would've happened had Maroon not gone home.

"If it wasn't for this, I said, I'd probably be home and I'd use any kind of excuse not to come," aunt Jan Phegley said from the basement of brother Rob Ferrera's house. "But my brother keeps calling me and he doesn't give me any excuse to stay away. And when I get here I'm OK. And (Patrick's brother) Justin goes: 'Yeah, Aunt Jan, don't you think we would be home? But we're here.' It's just made such a big difference in everybody's life."

No one more so than Anthony, the 10-year-old center of the family who perhaps like his father growing up doesn't realize how good of a hockey player he could be. Last July, Patrick was watching his son play at the same Oakville roller hockey rink he played in as a kid the night he had to decide where to sign.

His dad, Phil Maroon, wasn't so sure Patrick should take on the pressure of playing in St. Louis as the hometown kid and suggested he take the extra security from San Jose because he's now in his 30s and even flipped a coin: heads for the Blues, tails for the Sharks. It came up tails.

What changed in those two hours? He was with Anthony and fiancée Francesca.

"It's always been Anthony," Phil said. "That was the bottom line. That's what it came down to."

New Jersey offered over $3 million because general manager Ray Shero told Maroon he deserved it. Shero has gotten to know the family well over the years from the world championships and then trading for Maroon at the 2018 deadline and understands perfectly why he left so much money on the table.

"He did it for all the right reasons," Shero said. "You can't script this any better."

It's a script that sounds too hokey for Hollywood. Maroon grew up in Oakville outside St. Louis, once carved out a penalty box in the wall of his parents' furnished basement for full-contact games with his friends and played minor and high school hockey there. Now there are signs all over Telegraph Road in his hometown of Oakville like the one at Dierbergs Market that reads, "Congrats Oakville Big Rig Pat Maroon."

"We had that in the back of our mind, 'Wow, wouldn't that be neat if he was able to go all the way, and who knows what team he would be on?" said Mick O'Halloran of the Oakville Hockey Club that Maroon played two seasons with as a high school freshman and sophomore. "It was meant to be for him to skate here at this time."

This isn't the first time hockey brought Maroon home. He played for now Tampa Bay Lightning coach Jon Cooper with the North American Hockey League's Texarkana Bandits in 2005-06 and the team moved to St. Louis and became the Bandits the next season. Maroon had 95 points, was league MVP and led them to the national championship — and is now looking to do that again with another St. Louis team and his son watching.

"He always missed being away from his boy," Cooper said. "He wanted to be close to him and just the way it's all worked out, it's been awesome."

It wasn't always awesome. Phil said Patrick hit a low point in December when his game wasn't right and the Blues were in the aftermath of a coaching change and the losses piling up. New teammate Ryan O'Reilly saw what Maroon was going through and set him up with his dad and sports psychologist Brian O'Reilly for some sessions around the holidays that got him on track mentally.

"Everything seemed to turn around at that point," Phil said.

The Blues went from last in the NHL the morning of Jan. 3 to the playoffs. But the more important developments came with Anthony's team.

Patrick and Anthony got to play in the Meramec Sharks' annual father/son game for the first time in March. That surreal experience reminded Patti of the skills competition in Edmonton when she saw her youngest son and her grandson standing on the blue line in matching Maroon Oilers jerseys, and she and Phil then got to watch them skate on the same ice with the same youth team Patrick also played for as a kid.

"It was just surreal," Patti said while wearing her son's jersey. "His heart wanted to always sign with the Blues because of Anthony."

It was the day the Blues were leaving for Winnipeg to start the playoffs against the Jets. The team held the plane so Maroon could say goodbye to the grandfather he was incredibly tight with, something that might not have been possible if he signed anywhere else.

"We were all standing around crying," Patti recalled. "He had to leave, so he's bending down and he's hugging and kissing my dead dad and he's going: 'Grandpa, I love you. I love you. I'm gonna win the Stanley Cup for you.'"

Grandpa Ernie called that last summer after Maroon signed with the Blues. He'd always send video messages to Patrick asking for goals or congratulating him, and this one that ends with a puff from his cigar is still saved on Jen's phone.

"Welcome home Patrick and Francesca," Ernie said, stogie in hand. "I'm so happy that you're gonna be playing next door here. I love you, and the Blues are waiting for ya. They're already predicting they're gonna win."

The night before Game 7 against Dallas, he told him, "Now go dream of big goals" and forget about assists. Wearing No. 7, Maroon scored to win Game 7 on May 7 directly in front of family members sitting in row 7 of section 107 and only minutes after Jen, husband Paul and Rob kissed the prayer card from Ernie's funeral.

Patti Maroon was battling Shingles at the time and didn't even see the goal because fans were standing in front of her. Son Philipp ran to tell her Patrick had scored, and it was bedlam in the best possible way.

"Everybody in my family was crying," Patti said. "I just felt like they're really going to win the Stanley Cup. Like, this is for real now."

Maroon looked around at Stanley Cup Final media day and it all hit him. The decision to take less money and term to play for the Blues, the tumultuous season and now the chance to lift the Cup that's replaced the old roller hockey trophy of his youth.

"Well, it's worth it now, right?" Maroon said. "Money doesn't solve problems in the world anymore. It doesn't really bring you happiness. Living out your dream and being home and being with family and being with a team in that locker room and have those guys fight, sweat and be where we're at right now, that means more to me."