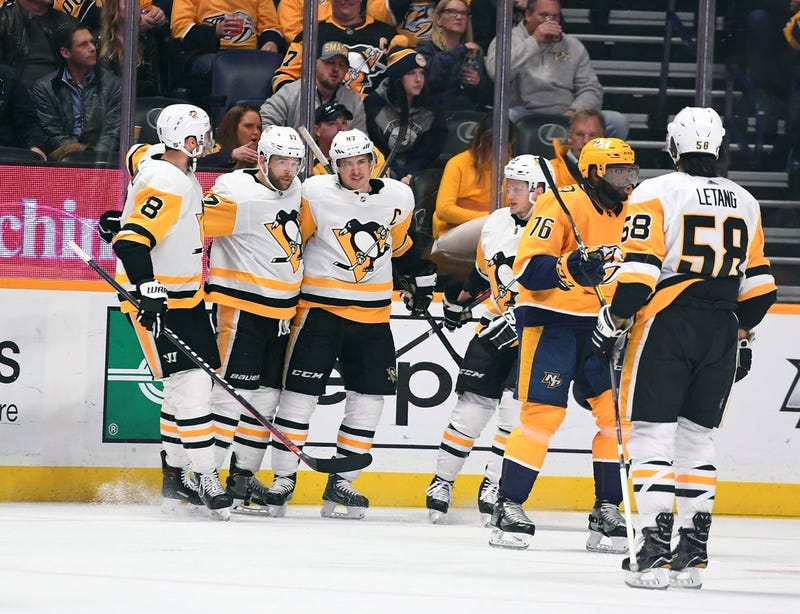 PITTSBURGH (93.7 The Fan) - Giving away points down the stretch of the regular season while battling to secure a playoff spot, as the Penguins have done with alarming regularity recently, has to be weighing on Mike Sullivan’s mind. But on the horizon is a defensive counterbalance he will welcome.

The return of Kris Letang last weekend brings the obvious advantages of adding speed and creativity – Letang’s puck distribution was very good Thursday in Nashville and underscores his ability to help create even-strength opportunities. Letang also helps immeasurably in giving the Penguins better ability to escape the forechecking pressure that has proved to be problematic for them this season.

But while Letang of course is an automatic lineup insertion, Olli Maatta right now may not be. Maatta, who has missed the last 19 games with a shoulder injury, is healthy and could play as early as Saturday in Dallas.

But can Sullivan remove either Marcus Pettersson or Erik Gudbranson from the lineup when both have been contributing and his team is on a 12-4-4 roll despite its late-game issues? To this point, both have been playing better than might have been imagined when they were acquired, Pettersson using his reach to good advantage and chipping in offensively and Gudbranson looking nothing like the guy who struggled to -27 with the Canucks prior to the deadline.

Both, of course, play with more of an edge than Maatta, but neither is a distinct upgrade in speed and neither has his experience playing in critical situations at critical times in a season. It’s an interesting call for Sullivan, who knows Maatta better than either of the other two. But it’s not a call he will dread; nothing suits a coach better than knowing he has good options when and if the performance of a player isn’t what he expects.

If all are healthy, Sullivan could opt to use Gudbranson against more physical opponents, like a playoff matchup against Tom Wilson and Washington. But building a use case based on the opponent can’t overshadow any player’s performance, as they shouldn’t stay in the lineup if their overall effectiveness has waned.

It’s a great problem to have, as they say, except that it’s not a problem. It’s a luxury, and one that Sullivan will appreciate. After all, he just finished a stretch of dressing Joseph Blandisi for five games while giving him less than four minutes of ice time twice. That’s under even his Ryan Reaves bar.

Internal competition for forward spots is not on the immediate horizon, as Evgeni Malkin and Zach Aston-Reese both remain out and Aston-Reese may not be ready for the start of the playoffs in a little more than two weeks. But it could be that either Adam Johnson, added to the fourth line in Nashville with very limited minutes, or Teddy Blueger will do enough over the final seven games to merit some consideration for fourth line duty when Malkin and Aston-Reese return.

Certainly anyone who can drag some production out of the fourth line will be welcomed.

Just like the notion of internal pressure bringing out the best in players.