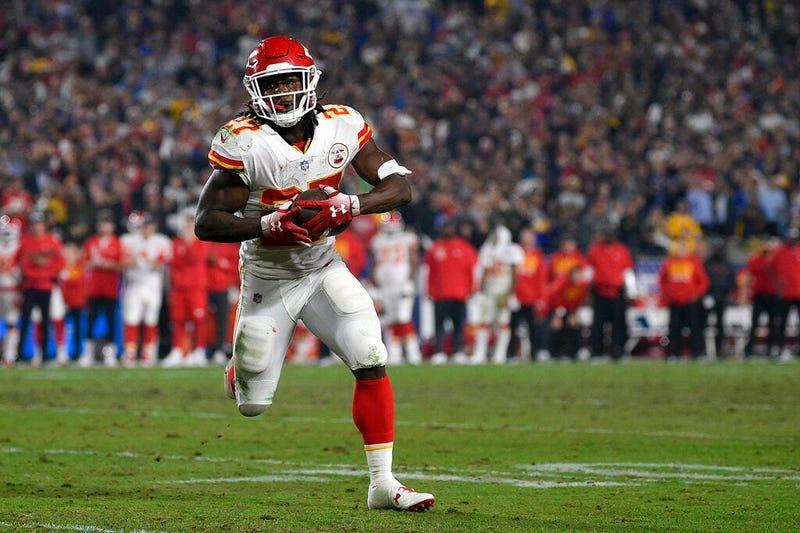 BEREA, Ohio (AP) — The lasting visual of Kareem Hunt's second NFL season wasn't him stiff-arming a linebacker, shedding a tackle or barreling over a cornerback at the goal line for a touchdown.

It was Hunt pushing a young woman and then kicking her while she was defenseless on the floor.

That moment caught on a surveillance camera mortified the sports world and led to the Kansas City Chiefs parting ways with one of their best players, a move universally admired.

The Cleveland Browns found it offensive as well. However, they also believe it was a random act by a good-hearted young man who feels remorseful and deserves another chance.

On Monday, the Browns, who seemed to finally emerge from years of gloom, doom and dysfunction by winning seven games behind rookie quarterback Baker Mayfield this past season, signed Hunt to a one-year contract.

The shocking signing came while the league continues to investigate Hunt's behavior in an incident that took place in a downtown hotel lobby last February. It came just weeks after Cleveland's turnaround season following a 0-16 calamity that resulted in the hiring of new coach Freddie Kitchens, whose appointment created more momentum for a franchise that has spent the last 20 years spinning its wheels.

The Browns feel they're doing the right thing. Time will tell. Hunt remains on the commissioner's exempt list and could receive a significant suspension.

General manager John Dorsey, who drafted Hunt in the third round in 2017 while he was with Kansas City, said the decision to sign the 23-year-old was rooted in his Christian faith. Hunt has shown contrition, sought counseling and treatment, and vowed to never make the same mistake.

That's enough for Dorsey, who said nothing is guaranteed and that he will have zero tolerance for further wrongdoings by Hunt.

"You guys always hear me talk about men of character," he told reporters, who met with the GM in a conference room for 25 minutes not long after the team announced Hunt's signing. "I'll stand by that. I see a lot of men of character who commit egregious acts. But at the end of the day, they learn from those acts, moved forward and became better people. Again, I believe in second chances."

Dorsey was adamant that the Browns completed a "thorough" investigation — the league's inquiry is still not complete — before signing Hunt and that owners Dee and Jimmy Haslam approved the decision to add another troubled player (see Johnny Manziel, Josh Gordon) to Cleveland's roster.

However, Dorsey said the team's diligence did not include speaking with the woman seen on the tape.

Later, standing in the lobby of the team's headquarters in front of a generic backdrop and not one that would typically feature one of the team's corporate sponsors, Dorsey was asked what his message would be to any female employees of the Browns.

"I think we're all appalled by it. It is an egregious act," he said. "We all understand that. But after doing our research, extensive research, analyzing the situation, we came to the conclusion that, you know what, I am willing to help a man from a second chance moving forward to be a better person, and that's all you can ask for in society, and that's all I'm trying to do."

But the decision to bring aboard Hunt raises other questions:

Why now? Why not wait until the draft to find another running back? Are the Browns equipped to handle Hunt? And is Dorsey confident he really knows Hunt as a person?

But Hunt fooled the Chiefs. He lied about what happened before he was released, and the Browns are counting on the Cleveland native to be straight with them and be a model citizen when he returns to play for his hometown team.

Hunt released a statement saying he regretted his actions and vowed to change.

"I would like to once again apologize for my actions last year," he said. "What I did was wrong and inexcusable. That is not the man I was raised to be, and I've learned a great deal from that experience and certainly should have been more truthful about it after the fact. ... I am committed to following the necessary steps to learn and to be a better and healthier person from this situation.

"I also understand the expectations that the Browns have clearly laid out and that I have to earn my way back to the NFL. I'm a work in progress as a person, but I'm committed to taking advantage of the support systems that I have in place to become the best and healthier version of myself."

Dorsey insisted the Browns didn't feel pressured to sign Hunt out of fear he would go to another team.

The Browns are trusting Hunt can be that for them.