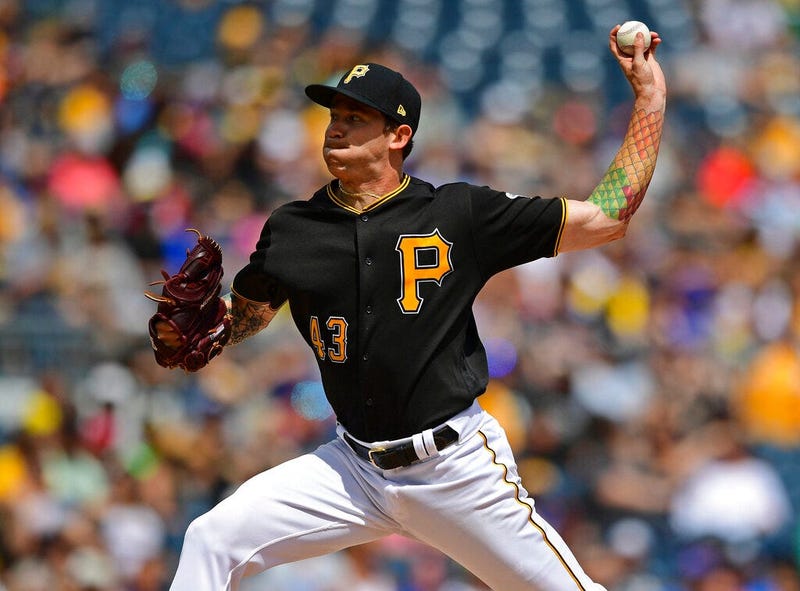 PITTSBURGH (AP) — Kris Bryant homered in the seventh inning, and the Chicago Cubs got out of three bases-loaded jams to snap a four-game skid with a 2-0 win over the Pittsburgh Pirates on Saturday.

After committing an error at third base each of the previous two innings, Bryant drove the first pitch of the seventh from Steven Brault (3-2) into the left-field bleachers to put Chicago ahead 1-0. It was Bryant's 25th homer this season and third in five games.

The Cubs moved within one-half game of first-place St. Louis in the NL Central. The Cardinals and the Philadelphia Phillies, who are chasing the Cubs in the wild-card standings, were playing later Saturday.

Jon Lester (10-8) gave up four hits and five walks in six innings after allowing Pittsburgh to load the bases with one out in the first and nobody out in the fifth. He got Kevin Newman to fly out to right in the fifth before striking out Bryan Reynolds and getting out of it when Starling Marte flied to center.

Pittsburgh stranded 11 runners and fell to 7-26 since the All-Star break. It loaded the bases a third time with two outs in the seventh.

After Ian Happ fully extended in left field to catch a sharp line drive from Reynolds for the second out with runners on first and second, Cubs reliever Tyler Chatwood hit Marte with a pitch. Josh Bell bounced to second to end the inning.

Happ scored from third on a throwing error by catcher Elias Díaz in the eighth.

Rowan Wick came in after Chatwood walked Adam Frazier to lead off the ninth. He retired each of the three batters he faced for his first major league save.

Brault didn't allow a hit until Addison Russell singled to third with one out in the fifth. He reached career highs in innings pitched with seven and strikeouts with eight, and allowed one run on two hits with one walk.

TRAINER'S ROOMCubs: RHP Steve Cishek said he was pain-free following a bullpen session Saturday. He could be activated for Chicago's game against San Francisco on Tuesday. Cishek was placed on the 10-day injured list with left hip inflammation on Aug. 10.

UP NEXTCubs: LHP José Quintana (10-7, 4.11 ERA) will try to avoid taking a loss for the first time in nearly two months when he takes the mound at the MLB Little League Classic in Williamsport, Pennsylvania, against Pittsburgh on Sunday. He is 6-0 in eight starts since last losing June 22.

Pirates: RHP Mitch Keller (1-1, 7.94) will make his second start on Sunday since being recalled from Triple-A Indianapolis on Aug. 12. The 23-year-old rookie picked up his first major league win in four starts by allowing two runs (one earned) on five hits against the Angels on Monday.___More AP MLB: https://apnews.com/MLB and https://twitter.com/AP_Sports