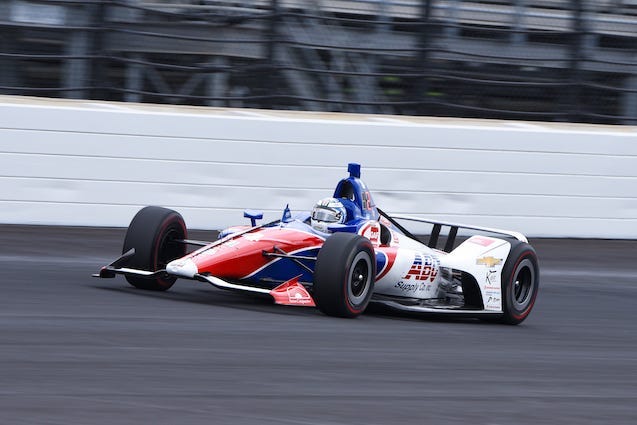 Kanaan, who will start 16th, admitted the speed came with the aid of a tow from the cars in front of him but was happy with the gains his team made from Monday’s practice.

“I wasn’t really happy with my car on Monday and I was extremely vocal about it, and I think my engineers heard me, so we made it better today,” said Kanaan.  “Obviously conditions look pretty similar to what we’re going to see on Sunday, hopefully.  It was a pretty easy day for us.”

Rookie Santino Ferrucci was second fastest in the final practice with a fast lap of 225.486 mph in the No. 19 Honda for Dale Coyne Racing.

“The No. 19 Cly-Del Manufacturing Honda is in really good shape,” said Ferrucci.  “We could pass about everybody and we’re quick, so there isn’t much else to say really.  We’re looking forward to the race.”

2017 Indianapolis 500 winner Takuma Sato was third fastest at 225.468 mph in the No. 30 Mi-Jack/Panasonic Honda for Rahal Letterman Lanigan Racing.

“I think we have a strong package, not the strongest package we’ve had, but I think we made good progress,” said Sato.

PNC Bank Chip Ganassi Racing’s Scott Dixon was not happy with the No. 9 Honda after turning the 19th fastest lap of the day at 223.388 mph.

“I hope we find something wrong with the car because it wasn’t great,” said Dixon who will roll off 18th.  “We were trying to get through some last-minute items, but ultimately it was not great anyway, so we are trying to figure out why.”

Dixon’s teammate Felix Rosenqvist was right behind him at 20th place with a fast lap of 223.210 mph.

“It was a bit of different conditions today,” said Rosenqvist.  “Hopefully, it will be be like this on race day, so we have an idea on what it is going to be like.”

Norman led 29 of 40-laps and came out of turn 4 with the lead but Askew took advantage of the draft and slid to the inside to win by 0.0067 of a second, the fourth-narrowest margin in race history.

The victory enabled Askew to stretch his championship lead to 21-points over Juncos Racing’s Rinus VeeKay, who finished third.