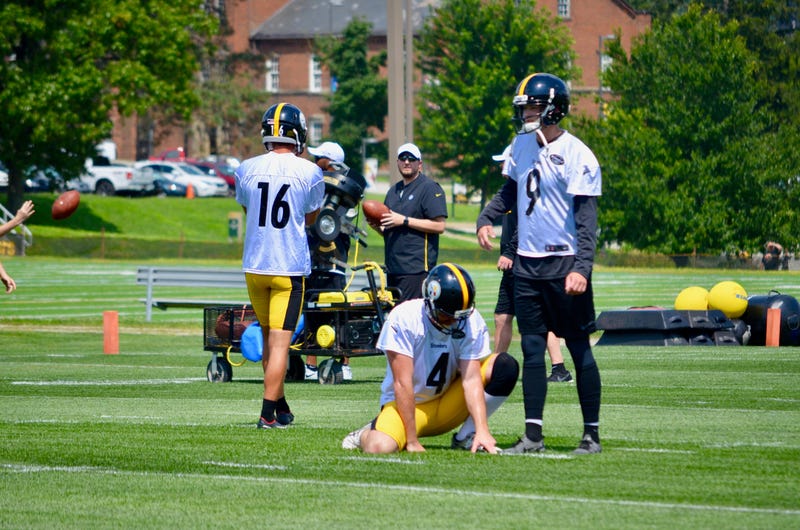 LATROBE (93.7 the Fan) - No fights at Steelers camp Thursday but we did see something we hadn’t really seen so far – field goals!

Not only that, both Chris Boswell and newcomer Matthew Wright made all of their attempts ranging from 30-52 yards – Boswell was 7-7 while Wright was 6-6 since one of his attempts was aborted by a bad Vance McDonald snap. McDonald was filling in for Kameron Canaday who felt some tightness in his leg and was held out.

“Versatility and the ability to do multiple things helps their cause and ours,” said head coach Mike Tomlin.  “A couple of tight ends, Trevor (Wood) and Vance McDonald, snap, long and short.  Their day job is tight end, we know they are both capable.  That’s kind of what this journey is about.”

Boswell, who went from first in the NFL to worst in accuracy from 2017 to 2018, did show a slightly stronger leg.

Devin Bush, who continues to show excellent closing speed in drills, lined up as the “up man” in punting formation.

On the injury front, Anthony Chickillo and Ryan Switzer returned to practice while Bud Dupree and Mark Barron sat out.  Donte Moncrief was dressed but didn’t participate in drills with his sore finger. Sean Davis and TJ Watt worked on the wide but no indication that they’ll return soon.  Mike Tomlin continues to remain unconcerned about any injuries.

Ben Roethlisberger was again on point with most of his passes. He was 3-4 in the 7 Shots goal line drill.  After Bush broke up a pass for JuJu Smith-Schuster, he hit Juju (who beat Mike Hilton), Eli Rogers (who beat Terrell Edmunds on a tight throw), and Diontae Johnson who was wide open after a pick.  Mason Rudolph was 1-3 – he hit James Washington (who beat Marcus Allen), Cam Sutton broke up a pass intended for Zack Gentry which was intercepted by Jordan Dangerfield, then LB Robert Spillane deflected a ball intended for TE Trevor Wood.

Friday is the annual night practice at Latrobe Memorial Stadium. It runs from 7-9:00 with players signing autographs for at least a half hour before.