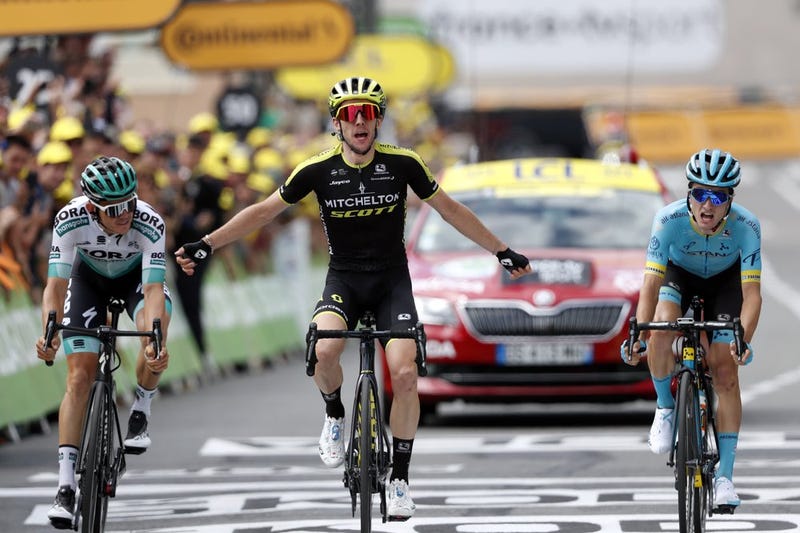 BAGNERES-DE-BIGORRE, France (AP) — In 116 years of racing at the Tour de France, riders have done all sorts of bizarre things, from jumping on trains to fighting with fans at mountain stops.

Rarely have they just vanished in the middle of a stage like Rohan Dennis did on Thursday during the first Pyrenean stage.

For a couple of hours on an otherwise uneventful day in the mountains, nobody was able to say where the time trial world champion had gone. His Bahrain-Merida team even sent an alarming message out on social networks, saying all it cared about was “the welfare” of Dennis after Tour organizers announced he had pulled out of the race.

The Australian ultimately resurfaced at the finish line in Bagneres-de-Bigorre, where British rider Simon Yates, the reigning Spanish Vuelta champion, posted his first stage win after a long breakaway that did not shuffle the overall standings.

Dennis was spotted near the Bahrain-Merida team bus after the stage, but did not make any comment about his decision to pull out.

“We are also confused,” Bahrain-Merida team director Gorazd Stangelj said. “It was his decision today to stop at the feed zone. We tried to speak with him, he said ‘I just don’t want to talk,’ and abandoned the race.”

Dennis quit with about 80 kilometers left before the two big climbs in Stage 12, prompting Bahrain-Merida to open an investigation. According to the French TV station broadcasting the race, Dennis had an argument with officials in the team car.

Stangelj said Dennis’ condition was good enough to perform, adding he was not aware of any kind of argument that could have triggered the rider’s decision.

Dennis’s withdrawal was even more surprising as it came a day before Friday’s short time trial in Pau, where he would have been an obvious favorite alongside defending Tour champion Geraint Thomas given his pedigree in the race against the clock.

Stangelj said he was not aware of any complaint from Denis in regards with his time trial equipment and also dismissed suppositions that Dennis could have been frustrated with his role in the team. Bahrain-Merida’s main goal at the Tour this year was to fulfill former Tour champion Vincenzo Nibali’s ambition to fight for a podium finish.

“I never asked him to bring the water bottles in the race,” Stangelj said. “Actually, I even told him yesterday and today that he should save energy for the time trial.”

When asked if Dennis had been difficult to work with before, Stangelj said “it’s difficult to answer this question.”

“But I never have hard discussions with him,” he insisted. “We always found a solution when it was needed.”

Stangelj explained that after Dennis stopped at the feed zone, he was not immediately able to reach out to him because he had already passed that point on the route and could not turn back with his car. He finally managed to get his rider on the phone after another car from the team arrived next to him.

Dennis’ extraordinary withdrawal was the talk of the day but did not eclipse Yates’ maiden win at the Tour.

The British rider launched a counterattack behind a group of fugitives in a technical downhill and was joined at the front by Gregor Mühlberger and Pello Bilbao. The trio worked well together until the final sprint shaped up 200 meters from the finish line in Bagneres-de-Bigorre. Yates launched the sprint, was first into the last turn and held off Bilbao for the victory.

“I wasn’t very confident in beating them,” said Yates. “I didn’t know how fast these two riders were but my sport director told me to take the last corner in first position and I’m glad it worked out well. To have a stage at all three Grand Tours makes me very proud.”

Yates is working in support of his brother Adam at the three-week race and had kept a low profile until now. He made his move in the Peyresourde downhill, reaching a maximum speed of 94.3 kph (58.6 mph). He was as impressive in the day’s final ascent, the Hourquette d’Ancizan, and was joined at the front by Mühlberger before Bilbao jumped across to them on the descent to Bagneres-de-Bigorre.

“This was probably a unique opportunity for me,” Yates said. “My main goal is to help Adam in the mountains and we thought that wouldn’t be needed today, that’s why I took the breakaway.”

As the Tour hit high mountains with two first-category climbs, the main favorites closely watched each other and did not attack, saving strength for the super hard days still to come. The main pack of contenders crossed the finish line 9 minutes, 35 seconds behind the winner, with no major change in the overall standings. Frenchman Julian Alaphilippe kept the race leader’s yellow jersey ahead of Friday’s time trial in Pau, 1 minute, 12 seconds ahead of defending champion Geraint Thomas.