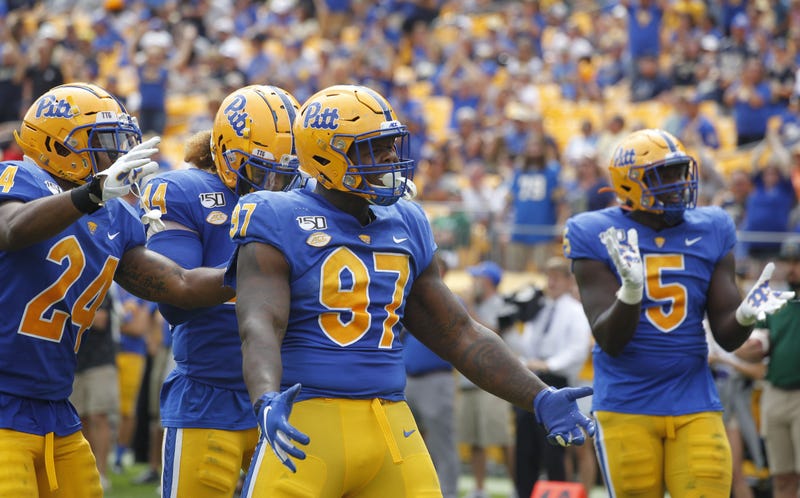 Pitt’s defensive front may not face a tougher test than what they saw in Saturday’s 35-34 upset win over No. 15 UCF. And, to this point, they have passed with flying colors.

That group deserves a considerable amount of credit for the victory and for Pitt’s defensive play through four games, in which the Panthers have gone 2-2. Quite simply, they have wrecked havoc.

“Coach (Randy) Bates and Charlie Partridge together have done a great job with the d-line,” Pitt coach Pat Narduzzi said of his defensive coordinator and defensive line coach. “Credit goes to those guys. It goes to our football players that are continuing learning. If you walk by the D-line room over there they're always in there watching tape, trying to figure out what that team's doing and how can I get better.”

Saturday’s game is a shining example of the performance and depth of the defensive line. Dealing with hot, muggy temperatures and facing an offense that is one of the quickest tempo teams in the country, the Panthers’ defense held serve, holding the Knights to 34 carries for 85 yards, an average of 2.5 yards per rush.

“We’re stuck in a jam there,” Narduzzi said. “The scary part was that was a scary part; your D-line is down. Also, your (defensive backs) are beat up. We're putting new guys in here, and we're playing a team that's snapping the ball in eight seconds. You're like, ‘Oh, boy.’ You look upstairs and say a prayer.”

It was answered, apparently. Pitt scored another marquee win under Narduzzi, and did so without two key starters in the trenches.

“Still wish we had Keyshon Camp and Rashad Weaver, I keep saying that,” Narduzzi said of the two players who accounted for 8.5 sacks in 2018, but will not play again this year with injuries. “I look at it all the time, man, what if we had those two guys? Because they're difference-makers.”

Leading the way has been redshirt sophomore defensive lineman Jaylen Twyman, who has racked up 5.5 sacks through four games, fourth-best in the NCAA.

“He just keeps getting better,” Narduzzi said. “I’ve talked about it every week. I don't care about the sacks or what he did four games ago or two games. He’s got zero sacks this week.

“So nobody cares what we did last week or what we did the week before. Everybody cares about what we're going to do this Saturday at 12:30 (against Delaware). And I want to see him get another sack.”

Twyman is not alone. Fellow redshirt sophomore Deslin Alexandre has 3.5 sacks. Habakkuk Baldonado, a redshirt freshman from Rome, Italy, has two more. In all, Pitt’s defense has brought down the quarterback 18 times in two games.

“It's called developing your players, your young players,” Narduzzi said. “And that's what we have to do.”