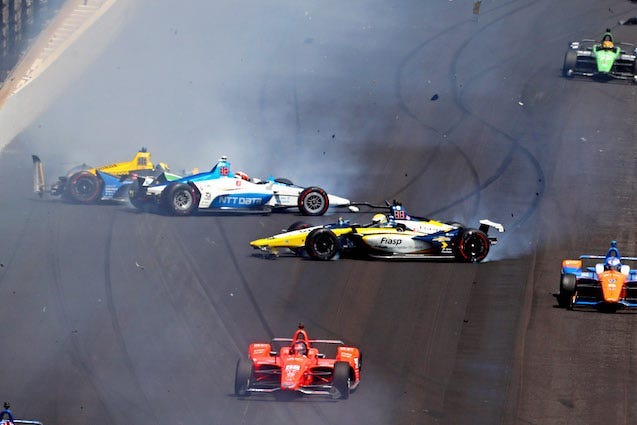 SPEEDWAY, In. (93.7 The Fan) - Chip Ganassi's IndyCar team starts every year with two goals: Win the Indianapolis 500 and win the championship.  A crash on Lap 178 ended the hopes of accomplishing that first goal.

The 103rd Indianapolis 500 started out promising as defending and 5-time series champion Scott Dixon quickly moved up into the Top 15 after starting 18th.  Dixon continued that march forward by getting excellent fuel mileage out of the No. 9 PNC Bank Honda.  Dixon's first pit stop was on lap 38 of the 200-lap race.  Conversely, leader Simon Pagenaud was only able to go 32-laps on his first stint.

Dixon continued that trend on the second stop when he pitted on lap 72.  Pagenaud was the first of the leaders to pit during the second round of stops, coming in on lap 64 followed by the rest of the top 5 between laps 67 and 69.

Pagenaud was the first to hit pit road on the third round of stops on lap 99.  Josef Newgarden was next on lap 102.  Conor Daly followed on lap 103.  Alexander Rossi came in on lap 106.  Meanwhile Dixon continued to sit in the top 10, take advantage of the aerodynamic draft before pitting on lap 111, a dozen laps after the leader!  The plan was falling into place.

Pagenaud's next pit stop was on lap 129 followed by Ed Carpenter and his teammate Spencer Pigot on lap 134.  Newgarden pitted on lap 136 followed by Sebastien Bourdais on lap 137 and Rossi on lap 138, cycling Dixon into the lead.

The plan almost immediately went out the window when rookie Marcus Ericsson spun entering pit road.  Ericsson hit the inside wall and then the outside wall, coming to a stop sideways in pit lane, forcing a full course caution.

"That yellow flag just hosed us," said Dixon.
Chris Owens-IndyCar Series
Dixon and teammate Felix Rosenqvist hit pit road on lap 141 while the race was still under caution and restarted the race just outside the top 10.

Disaster struck on lap 178 when Rahal Letterman Lanigan Racing's Graham Rahal and Bourdais made contact heading into turn 3.  The pair bumped before the corner but neither would concede the turn to the other driver and they made contact again, this time heavily damaging both cars.

The accident had the drivers behind the pair, including Dixon and Rosenqvist, taking evasive action but they both suffered damage.  Dixon was able to continue but Rosenqvist could not along with Rahal, Bourdais, Zach Veach and Charlie Kimball.

The pit road accident involving Ericsson put the Ganassi duo back in the pack where they were victims of someone else's mistake.

"We were hung out in the back of the field, and just got caught up in that accident," said Dixon.  "I had the car stopped in time, but then I just got hit up the rear.  I'm not sure who that was, but it hit us pretty hard and then broke the right side floor.  It took the gear out, so it was just stuck in sixth gear the whole time.  So it was pretty interesting just to finish."

The fact that Dixon was able to soldier on with a car with a broken floor and gearbox problem is a testament to the never quit attitude of the Mike Hull led "Wolfpack" crew and their driver, who finished 17th.

Rosenqvist, who started the race 29th, was not as fortunate as the No. 10 NTT Data Honda suffered extensive damage ending the rookie's first Indy 500.

"It was kind of just a pack-up of a lot of cars spinning and smoke and grass on the track," said Rosenqvist, who was credited with a 28th place finish.  "I tried to go on the outside, but it didn't work out.  I kind of wish I would have seen earlier what was about to happen, but it was an unfortunate situation to be in.  It was a shame.  We had a really good car today.  The NTT Honda guys did a brilliant job today, coming from the back up to the top 10.  I'm really sad for the guys."

The team returns to action next week as the NTT IndyCar Series visits the Motor City for the "Duel in Detroit", where Dixon is the defending winner of race number 1.