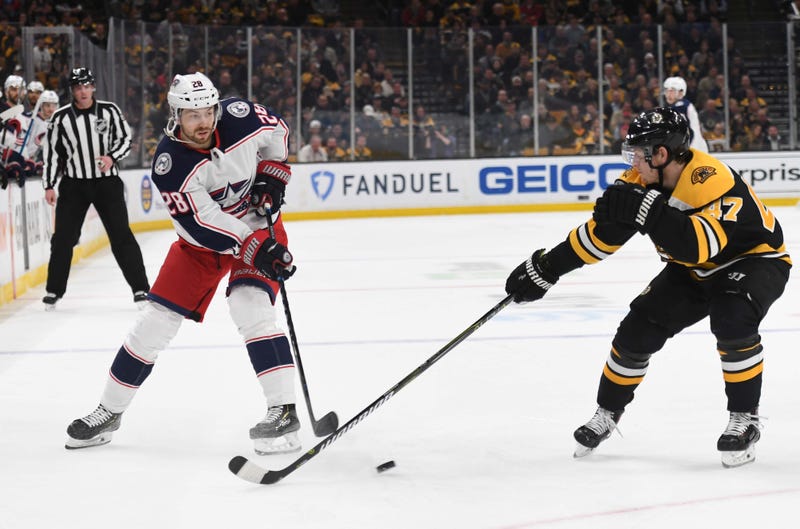 BOSTON (AP) — Matt Duchene scored on a power play at 3:42 of the second overtime to give the Columbus Blue Jackets a 3-2 victory over the Boston Bruins early Sunday morning, tying the second-round playoff series at a game apiece.

Artemi Panarin scored twice and assisted on the winner and Sergei Bobrovsky stopped 29 shots. The Blue Jackets twice gave up a lead and twice came back to tie it.

Matt Grzelcyk and David Pastrnak scored and Tuukka Rask made 36 saves for Boston. The Bruins won the opener — also in overtime.

The series moves to Columbus for Games 3 and 4 on Tuesday and Thursday nights.

Panarin’s second goal made it 2-2 with 12 minutes left in the second period, and it stayed that way through a scoreless third and a first overtime in which the Bruins killed off one penalty. But when Patrice Bergeron was sent off for tripping in the second OT, the Blue Jackets made them pay.

Less than a minute later, Duchene kicked the puck onto his stick and slid it through Rask’s legs to end it. As the Columbus players celebrated against the boards, the Bruins filed off the ice and many fans threw the giveaway yellow towels onto the ice.

The Bruins took the lead about eight minutes into the game with a power play goal by Grzelcyk . It was still 1-0 at the end of the first, when Brad Marchand was called for cross-checking after the first-period buzzer.

Sixty-three seconds into the power play to begin the second period, Panarin tied it on a one-timer from Seth Jones. But less than a minute later, Game 1 hero Charlie Coyle went behind the Columbus net and backhanded it off Pastrnak’s skate into the net.

Then things started getting really physical.

Bruins defenseman Zdeno Chara was off for cross-checking when Columbus forward Josh Anderson, whose interference penalty led to the first Boston goal, was called for high-sticking that left a bleeding gash under Sean Kuraly’s left eye.

Anderson was given a four-minute minor, but there was still a minute left on Chara’s penalty and during the four-on-four Panarin tied it with a perfectly aimed, top-shelf wrist shot from the right side.

The Bruins honored Boston Celtics Hall of Famer John Havlicek before the game. Rather than a moment of silence in memory of the Celtics’ career scoring leader, the Bruins played a highlight video and asked fans to stand up and applaud. A spotlight shone on his No. 17 on the banner hanging from the TD Garden rafters.

Havlicek died Thursday at the age of 79, and news broke during Game 1 of the Bruins series.

Notes: Coyle has five goals in nine playoff games with Boston after scoring seven in 44 postseason games (six seasons) with the Minnesota Wild. ... Panarin has a point in all six playoff games this year, a franchise record that surpasses the five straight by Boone Jenner in 2014. ... Bruins forward David Krejci, a game-time decision, took regular shifts. ... It was the seventh straight day there was an overtime game in the NHL playoffs.

Game 3 is Tuesday night in Columbus.