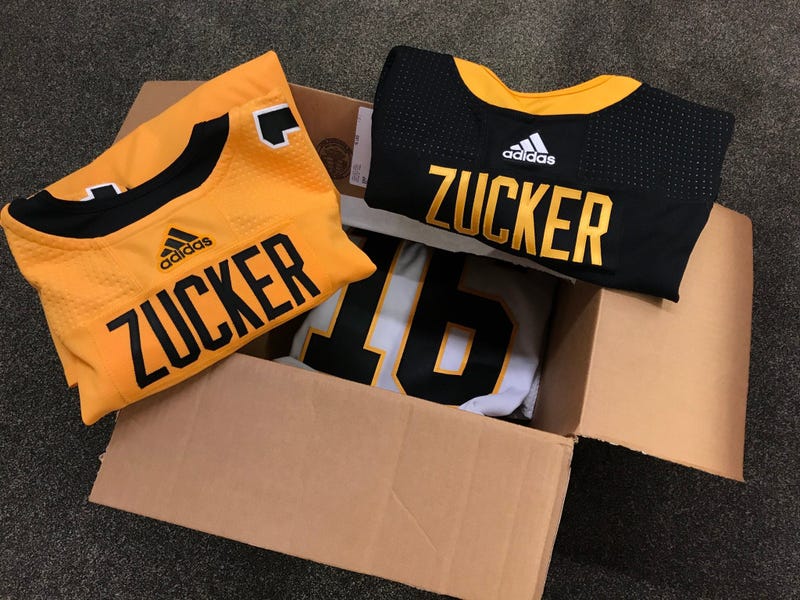 Before 6:30 a.m. on this Tuesday I got nine texts messages from various friends.

All had a variation of the same question. To paraphrase: “I have tickets for the game tonight, will Jason Zucker be here yet and will he be playing?”

“We believe he will be available,” Sullivan said. “He is scheduled to arrive this afternoon ... We will more than likely start him with Sid and go from there.”

It appears if you are headed to see the Penguins and Tampa Bay, there is a decent shot you might see the newly-acquired forward in the No. 16 sweater drifting down a wing hoping to catch one on the tape from Sid and bury it.

Or draw a penalty that he does so well.

Or force a high-zone turnover and use that speed to transition it into a breakaway --- he does that incredibly well, too.

You want it all now.

And I get that. You should.

Jim Rutherford went out and paid a hefty price for a player he feels can help this franchise from the moment he gets here.

Again, I get that. As sports fans we look at things in small windows and compartmentalize sometimes in the tiniest of canisters.

But here’s the way I’m looking at things: The move Rutherford made to go get Zucker really isn’t about the remaining games this season or a lay-it-all-on-the-line playoff run at the tail end of this season.

Rutherford smartly got Zucker for that one last push and punch of the Sidney Crosby and Evgeni Malkin era here in Pittsburgh. And he got Zucker so that, in an ideal Penguins world, he can be out there and aligned with Jake Guentzel as well. That bond will be forged largely at training camp next season and in through the early portion of the season.

This is what this is all about. Certainly there is euphoria today and that excitement should be happening. Plenty of people should be anticipating the roof blowing off the place when Zucker beats a goalie who is late in sliding over after taking a deftly placed pass from Sid and lighting the lamp in the next couple games. Because, after all, that will happen --- we all know it will.

Jake Guentzel won’t be back to full speed most likely until next season and will continue to only get better as he’s just 25.

Zucker comes with a contract that will keep him here until the end of the 2022-23 season. That’s three more seasons after this one is done.

So all this isn’t about tonight or next week or even next month. It’s about the totality of it all. It’s about Jim Rutherford, who is an absolute maverick and genius, putting together an assemblage of talent for that one final push of this era of two all-time great Pittsburgh Penguins.

It’s about putting Sid and Geno in the best possible position to perhaps earn another Cup --- and not really about the right now.