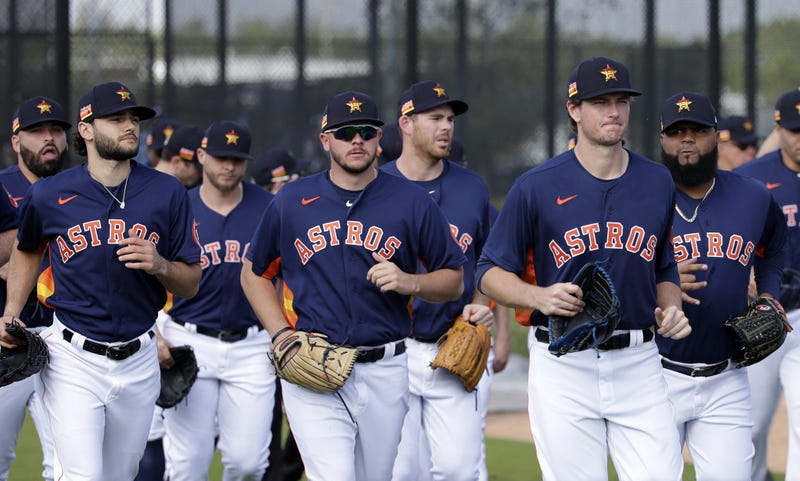 This current bunch of Houston Astros will try to position themselves as victims. They will whine and drone, they will complain and gripe.

Oh, it’s coming. Tell Mattress Mack to bet all he has on that. It’s coming. The Astros will try to flip this. They will turn this into attempting to become the aggrieved party in at least one aspect of all of this.

Before I fully explain, let’s just make sure we have the lay of the land all squared away …

The Astros are the cheatin’ bunch of cheating cheaters since the 1919 Chicago White Sox. That much is pretty much becoming as clear as the rhythmic beat of a garbage can. And the further we get from the 2017 season, each day it becomes even more clear that the Astros participated in some downright baseball scumbaggery.

People are mad and they should be.

The Astros are pariahs and they should be.

This is going to get ugly, and, well …

To that end the gambling house William Hill has set the over/under number at 83.5 for Astros total number of batters hit by pitches this season. That’s more than one every two games. The way people are talking and the early general reaction of some players who have reported for Spring Training on other teams --- well, you might want to bet the ranch on the over.

Now here comes the part where the Astros will try to act distressed and wronged.

Astros hitters will get hit by a bunch of pitches this season. I’m thinking it might even happen in the first month of the season as opposing teams (and especially veteran pitchers they might face) will get their pound of flesh from 60 feet, 6 inches away as they hurl fastball at the ‘Stros.

There will be a flashpoint --- perhaps even a benches-clearing one --- wherein new manager Dusty Baker and his players will insist the message has been effectively sent and now it has turned into overkill. I can’t quantify it in number of players hit by pitches or even describe an incident in full form, but this baseball season will head to a place where the Astros might be willing to take a few lickings, but they aren’t going to take it all summer.

And, to me at least, this will provide the high drama.

What happens when the Astros complain to Rob Manfred that a pitcher --- or pitchers --- have taken liberties with their hitters?

What happens when the Astros start to plunk people back in an attempt to protect their guys in that ages-old form of policing the grand old game?

What happens when Baker sits in his office in a pre or postgame news gathering session, reaches into his mouth to remove his toothpick for effect and tells everyone, “we’re sick of this sh-* and we are going to do something about it” after his guys get hit like seven times in a series?

Because of all they did to wrong everyone else in baseball, can it get to the point where the Astros have license to fight back?

Something like what I described is headed our way this baseball season. And it’s going to be rather interesting to see when --- or if at all --- the commissioner or anyone else will care one bit that people are “picking on” the Houston Astros.