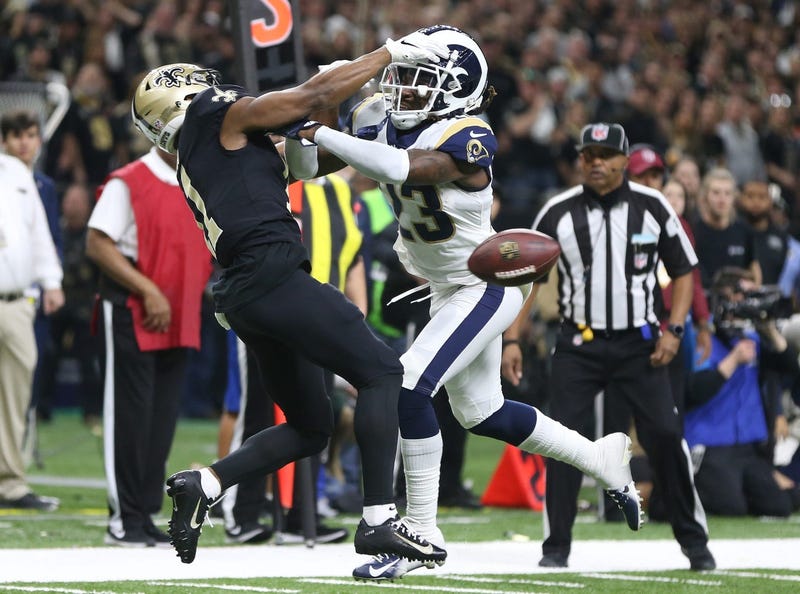 The wrong team is in the Super Bowl representing the NFC.

There is no doubt in my mind had the proper call been made --- a blatant and obvious pass interference late in the game --- New Orleans would have forced the Rams to call their final timeout at some point in the dwindling seconds, kicked a chip shot field goal and not given Los Angeles enough time to march down the field and counter.

It would have been and it should be Saints and Patriots in the Super Bowl.

Here's the deal, however: This talk about expanding replay and by extension challenges to pass interference calls is categorically out of line and just plain silly.

It is a Pandora's Box resting inside a can of worms if you ask me.

Again, Saints fans have a right to be madder than someone who got their pocket picked on Bourbon Street, but what they shouldn't be is some impetus for forcing an increase in reviewable and challengeable plays in NFL games.

You know why? Because I wonder where it would end. That is to say, let's imagine for a moment that somehow, somewhere the Competition Committee would think it would be a great idea to allow plays such as we saw with the non-pass interference call in the Saints game to be reviewed and challenged. Let's say some magic man in the booth would radio down (or a coach would throw one of those neat little flags) and then technology and hindsight would take over and things would be made correct.

That would be great, I guess.

But where would it end?

Certainly we were all ultra tuned into that moment and hanging on each snap because of where it was in the football game and in the season. It was late in the game in the NFC title game with seemingly the entire country watching and the officials blew it.

That said, there are times when a missed hold or a neutral zone infraction in Week 3 (or, heck, even in the opening stages of a playoff game) are just as important. Let's say for instance a team hits a huge play for a touchdown on the first play of their playoff game and they are playing at home. It sends the crowd totally bonkers as they go 75 yards on one play and take that 7-0 lead. Let's also say it was the play that lit the wick that ended up being something like a 28-10 win.

On that play, let's say that at the scrimmage line (away from the ball, even) there is a fairly obvious hold on an interior lineman.

Are we ready to allow coaches to throw a flag and challenge that?

After all, that's a judgment call in much the same way that pass interference call in Saints/Rams was. It was, simply, a man charged with the duty of calling a game missing the call.

Also, as such in my scenario, just because the play didn't happen in the fourth quarter doesn't mean it wasn't as consequential as any play that happened throughout the game.

I don't know about you, but I have seen big plays to start a game before and they seemingly give one team a jolt that sends them on their way and forces another into doldrums that they never can recover from.

But, what if a replay challenge called it back? Again, are we ready to put all judgment calls under a microscope and at the mercy of review.

I don't think we are. We can't be. If we are ready to do that, we should just have 22 camera with one zoomed in on each player and officiate the game that way.

The Saints got screwed, that is a certainty.

But what is also for sure is football would be a mess if we started reviewing and challenging more judgment calls.