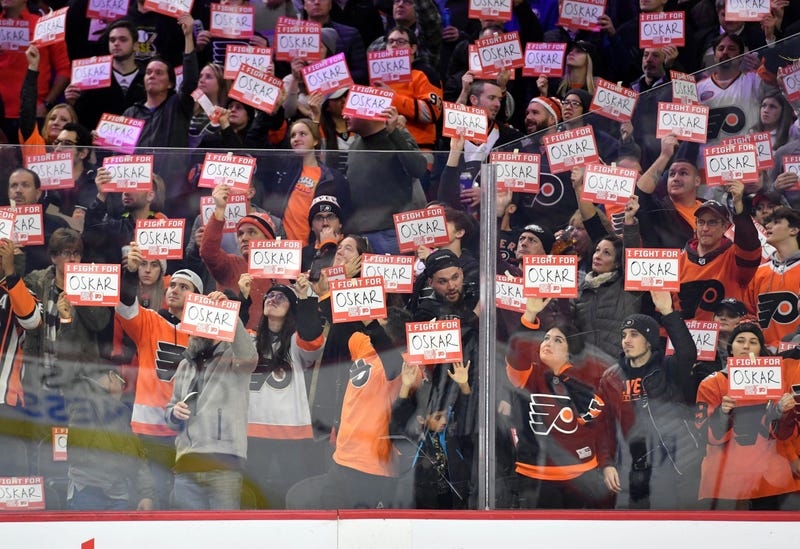 (93.7 The Fan) A thread on Reddit has been making its rounds attempting to vote Philadelphia Flyers forward Oskar Lindblom as the Metropolitan Division captain for the 2020 All-Star game.

The Flyers announced on Friday, December 13 that Lindblom, 23, has been diagnosed with Ewing’s sarcoma, a rare form of cancer that occurs in the bones or soft tissue around the bones.

The original thread on Reddit’s /r/hockey page has reached over 9,500 up votes and nearly 500 comments, most of which in good faith and supporting the cause.

The reasoning behind voting Lindblom as captain are to show that fans from all around hockey are supporting him.

Prior to the Flyers first home game since the announcement, Lindblom was with the team in good spirits and had a smile on his face.

The Flyers would snap a three game losing streak with a 4-1 win over the Anaheim Ducks in that game.

This would not be the first time an unexpected player was voted by the fans to be a division captain.

The 2016 all-star game was rocked with controversy when fans voted John Scott as the Central division captain.

Scott would go on to be the game’s MVP.

It is unclear how many votes have been cast for Lindblom and it unlikely to be known until the voting is closed.

Voting for the division captains is open until December 20.

Lindblom will miss the remainder of the season to undergo treatment.