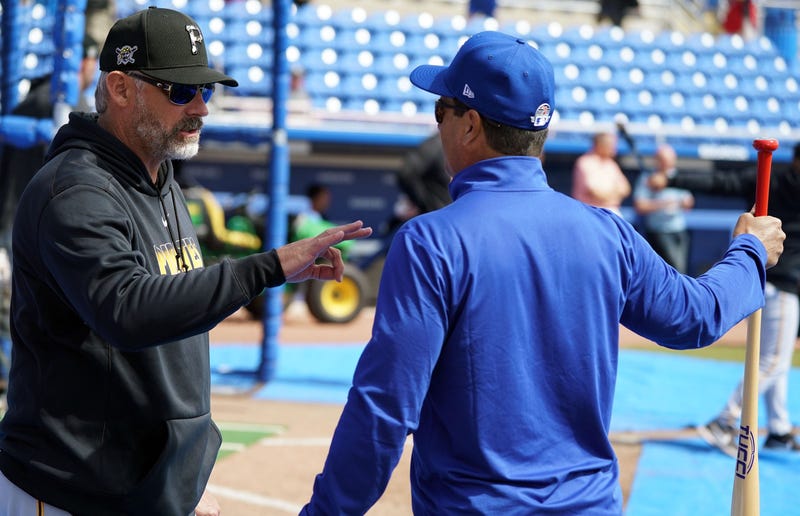 PITTSBURGH (93.7 the Fan) – Every Wednesday at noon over the last few weeks, Pirates manager Derek Shelton appears on the ‘Cook and Joe Show’ on 93.7 the Fan to discuss baseball.  It’s turned into him being front and center for the latest rumor about a return to the game.

Now there is a plan from the owners that is being evaluated by the players.

“The three of us have been talking for a month now about getting the sides together to talk and about baseball coming back,” Shelton said.  “The thing that I’m most excited about, is now they are talking.”

While the financial part appears to be a big sticking point, there are a few other modifications to a normal season.  Starting with a plan to play 82 games beginning around Independence Day.

“One of the things we’ve always talked about in a long baseball season,” Shelton said.  “You essentially have to lose a good number of games for it to be equivalent to losing one game in the NFL.  That’s not the case now.  We are going to have to be more aggressive on games right from the get go.  Always depending on player health.”

That leads to what likely will be another change, with a shorter training camp expected, there are reports of rosters expanding to maybe 30 players instead of 25.

“One of the functional things you see from a lot of good teams is using their entire club,” Shelton said.  “The reasons teams do that is because through different situations, especially injuries or guys struggling, you are going to need to rely on other guys in crucial parts during the season.”

That leads to the next change of likely seeing a universal designated hitter and Shelton tells 93.7 the Fan he will rotate that spot in the order, allowing him to give some tired players at bats without having to run them out in the field.

“Being a designated hitter is not an easy thing,” Shelton said.  “The mindset of it is not very easy.  My plan going forward with our group, we wouldn’t have someone do it all the time.”

“Having been a hitting coach in the American League.  You realize the toll it takes on National League players when they come into the American League and try to do it because the time between at bats.  They don’t have to go into the field and make a good play to feel like they are providing something if they are struggling at the plate.”

As for those struggling, Shelton says with a shorter season comes less patience and a need to sit players who aren’t performing.  Which goes back to the whole roster making an impact.

It should be interesting, more focus on every game and with a proposed 14-team post-season, expect more teams to be in the hunt until the end.