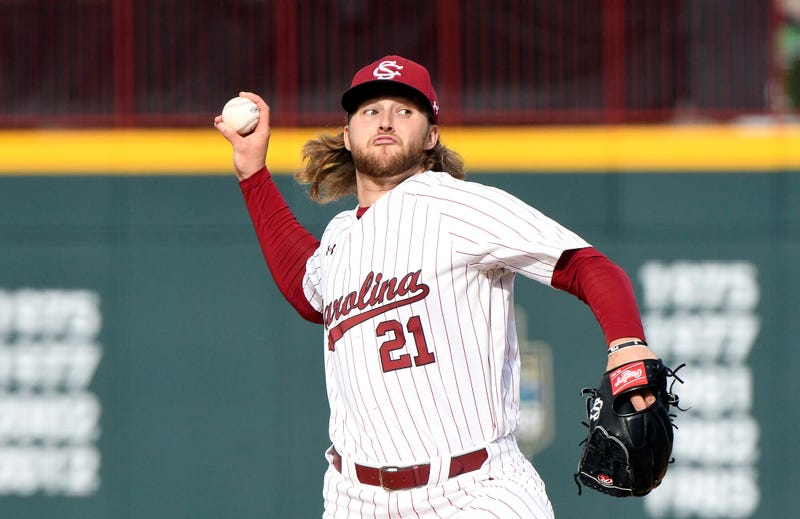 PITTSBURGH (93.7 the Fan) – We found out some details about the Pirates second pick of the first round Wednesday night that should make him fit right in.

“It’s always competing at our household, it’s doing the dishes competitive,” Mlodzinski said.  “It’s just something that leaked onto the field for me.”

“I’ve definitely learned to harness that over the past couple of years and have the right moments for it and control it.  That’s always helped me be successful.”

But the big question there, how is it that you can be competitive washing dishes?

“We have a timer on the microwave to see if we can beat the clock,” Mlodzinski said.

The 21-year-old has two younger brothers and an older sister and said his sister is the most competitive.

It was that drive which led to an injury that ended his sophomore year as aggressive  workouts caused a freak foot fracture.  He’s since figured out a routine of how far to push and when to rest.

Mlodzinski was able to come back and pitch in the Cape Cod League last year where he threw 29 innings, going 2-0 with a 2.14 ERA with 40 strikeouts to four walks.

“I knew some good would come out of it,” Mlodzinski said.  “I was positive throughout the whole injury and I had enough confidence going into this summer and trusted the work that I had put in to pitch pretty good.”

“It was obviously the best I’ve pitched yet in my career.  I felt it was coming.”

Mlodzinski played in Massachusetts against the Pirates top pick in the first round, Cape Cod MVP Nick Gonzales.

“I’m happy I don’t have to face him, that’s for sure,” Mlodzinski said.  “I think he’s one of the best players in this year’s draft.  I was surprised he didn’t go first overall.  I think the Pirates got a steal.  He consistently mashed up there at the Cape.”

Unlike many of his peers, when the Pirates draft pick has down time, he doesn’t go on social media and doesn’t play on-line games.

“I’m not going to say I never did, I think my mom made me make a Twitter in high school,” Mlodzinski said.  “I never was really around it.  I never grew up in a social media household.  I didn’t have any video games and didn’t have a phone until I was 16.”

The Hilton Head native does like to take advantage of the golf courses around his hometown.  And he loves music, playing the guitar and piano.

When he listens, it’s Alice in Chains, Sound Garden, Nirvana and other 90s stuff, but says he will jam to rock from the mid-60s to the mid-90s.

“Grew up listening to classic rock with my dad and my mom,” Mlodzinski said.  “Just kind of an old-timer, I guess.”

He’s already made contact with another tall, hard-throwing, first round Pirates pick.  Jameson Taillon texted him hours after the draft and Mlodzinski said he’s heard nothing but great things about the Pirates and the city.