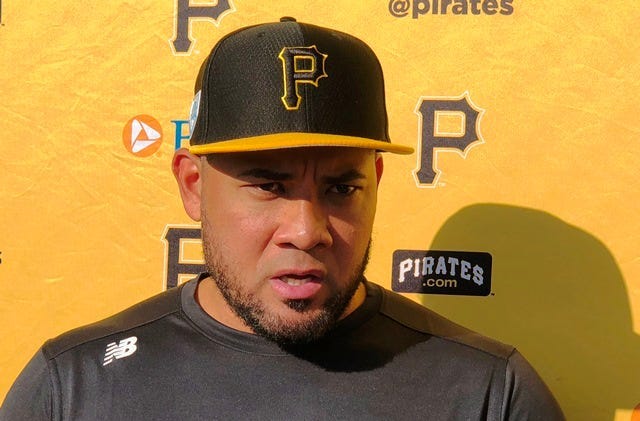 "I just want to share my gratitude for the organization giving me the opportunity," Cabrera said through interpreter Mike Gonzalez.  "I'm glad to be here.  I want to be here and help this team win. I just want to play baseball and be on a winning team."

The Pirates are Cabrera's eighth team. The switch-hitter, doesn't see a set role for himself as he attempts to make the 25-man roster.

"My goal is whatever the team needs," Cabrera said.  "Wherever they need me to play that's where I want to be.  I just want to be here to help the team win."

Cabrera primarily played a corner outfield position in recent years.  Gold Glover Corey Dickerson will be in left field, and Clint Hurdle is on record as saying that Lonnie Chisenhall is first in line to man right field until Gregory Polanco returns.  Cabrera and Chisenhall were Indians teammates last season.

"(Lonnie's) a great guy, a great teammate, a good ballplayer," Cabrera said.  "I'm very excited to see him in this organization, as well."

The Dominican Republic native admits it would be an honor to play right field for the Pirates.

"To not only play the same position as Roberto Clemente, but just to try to continue that legacy of Roberto Clemente," Cabrera said.  "He's a huge person for us Latinos, who was a pioneer for the Latinos to be a part of baseball.  It's a huge honor for all of us"

Cabrera shouldn't have a difficult time getting acclimated with his new teammates.  In addition to Chisenhall, he played with shortstop Erik Gonzalez in Cleveland, and the list goes on.

"I know a lot of the guys," Cabrera said.  "I have a really dear friend of mine here, Francisco Cervelli.  We came up together through the minor league system with the Yankees. I know a lot of the Latin ballplayers like (Francisco) Liriano, Starling Marte, (Gregory) Polanco, Pablo Reyes.  All those guys I'm very familiar with and connected to."

The first full-squad workout of camp gets underway Monday morning at Pirate City.

You can hear the entire Cabrera interview below.