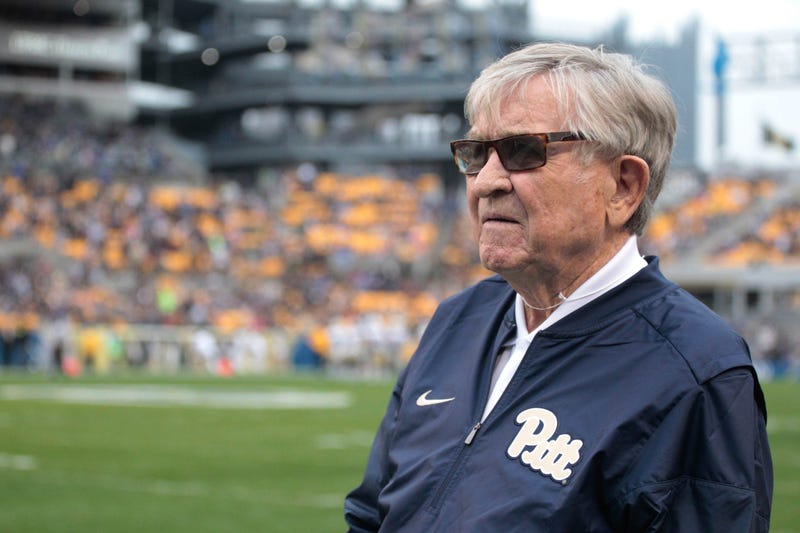 PITTSBURGH (93.7 the Fan) – Passionate, supportive, enthusiastic, friend, some of the words used to describe Pitt Hall of Fame coach Johnny Majors, who died in Tennessee Wednesday at age 85.

“I am saddened upon hearing of the passing of my beloved coach, Johnny Majors,” said Heisman winner Tony Dorsett.  “He was more than just an integral part of my college football career; he was a dear friend who continued his relationship with me far beyond my playing days.”

“He took a young high school kid and showed him how to be a leader and a man. My prayers are with his family, the Pitt community and all the players and coaches who have been a part of his life.  Rest in heaven, Coach.”

“Coach John Majors was, and always will be, an important part of the University of Pittsburgh’s history,” said Chancellor Patrick Gallagher.  “He is a celebrated championship-winning coach, but his impact on our players endured long after they hung up their helmets for the last time.

“On behalf of our extended university community, our thoughts are with Johnny’s family and loved ones during this difficult time.”

“Coach Majors set a standard at Pitt that all of us—coaches, student-athletes and administrators—continue to be inspired by,” Director of Athletics Heather Lyke said. “His championship legacy resonates in our department to this very day.”

“On a personal note, it was such an honor to welcome him back for enshrinement in the Pitt Athletics Hall of Fame last fall. Coach Majors always told me, ‘Pitt people are as passionate and loyal as they come.’ I think that description also perfectly describes him. He remained so loyal and committed to Pitt.”

“From the time I arrived at Pitt, Coach Majors was always incredibly supportive and so enthusiastic about Pitt and our football program,” said current Pitt football head coach Pat Narduzzi. “We have so many reminders around our facility of Coach Majors and his time here: the photos, bowl trophies and, of course, the 1976 national championship trophy. He is a coaching legend and his impact on Pitt will never be forgotten.”

His quarterback for the 1976 national championship team, Matt Cavanaugh, told the Cook and Joe Show he was a master motivator and a great compassionate human being.

“We all reveled in 1976, and wins and losses will come and go, you figure that out when you are in the business long enough,” Cavanaugh said.  “I think of him as a man and what he meant to me.”

“He had a way about him, a sincere enthusiasm.  I was from Youngstown, Ohio and he was coming out of Tennessee with that twang.  That in itself got your attention.  Just the words that came out of his mouth of what he thought winning was all about.  It was the fundamentals of having good character and a great work ethic.”

Cavanaugh said when he came back to coach at Pitt, it was like his relationship with Majors never changed.

“He was a character,” Cavanaugh said.  “He was fun.  He was intense.  He was demanding.  He was a compassionate, great human being that I will miss dearly.”