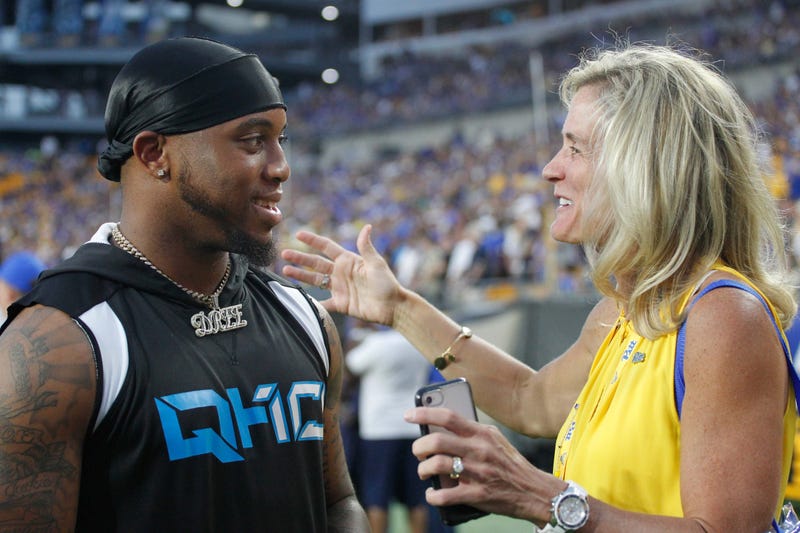 PITTSBURGH (93.7 the Fan) – While she says it’s pretty tricky to anticipate what will happen over the next few weeks and months, Pitt athletic director Heather Lyke is hopeful for football this year.  And she wants it so you can attend.

“We value that atmosphere.  We value the memories and experiences we are able to create for everyone who comes to the game.  That’s a big piece of it.  We would love to have it back to where it should be.”

Where is should be is a far place from where we are now.  Although Lyke said they have been in better communication with her staff and coaches even not being in the same location.  However, it’s tough because people, like her, feed off human interaction.

“To not have that connection and natural relationship and interaction is a miss,” Lyke said Thursday.  “That is what the coaches are craving.  They are passionate about young people.”

“They do this because they enjoy the relationships they get to build with the kids.  When the relationship is gone from a close proximity standpoint.  I think that is a challenge for them.”

Not that they aren’t working.  Lyke said head football coach Pat Narduzzi is up early in the mornings and holding daily staff meetings via their phones and computers.

“I know that he has created a structure where daily he has a report on what the coaches accomplished at the end of the day,” Lyke said of Narduzzi.  “You are allowed to conduct meetings with student-athletes and break-down video and be able to teach from afar.”

NCAA has prohibited coaches from in-person recruiting until June at the earliest, but they are still contacting potential Panthers remotely.

“It will be interesting to see how the relationships play out over time because we are focused on relationships,” Lyke said of recruiting.  “I’m not touring you through a locker room or a weight room.  Everyone has those things.  I think the best decisions are made when you base them on the people.”

Lyke said there are so many unknowns right now and that includes their budget.

“The reality is the economic impact of this entire pandemic is yet to be known,” Lyke said.  “I think it’s significant and we will adapt, however we need to adapt, in many ways.”