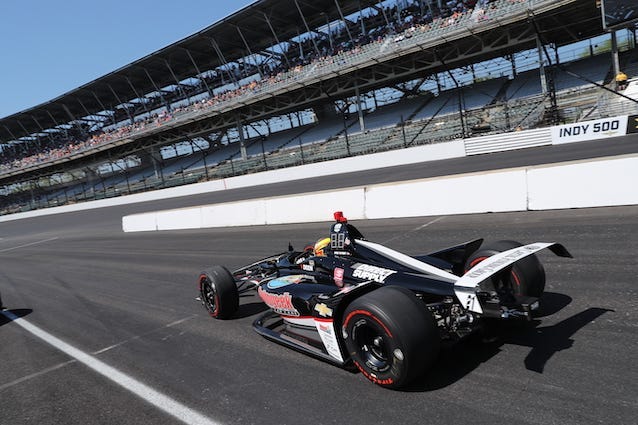 Speedway, IN (93.7 The Fan) – A crazy day of qualifying for the 103rd Indianapolis 500 Saturday at the Indianapolis Motor Speedway.  36-cars took the track to try to earn one of 30-locked-in starting spots that were up for grab in the 33-car field.

Weather played a big factor as the ambient temperature was the warmest of the week, which sent track temperatures soaring throughout the day.  Gusty winds also made for unpredictable handling as teams tried to walk the fine line of dialing up just the right amount of downforce to plant the car to the track with sacrificing straight-line speed on Indy’s huge straightaways.

Friday evening’s qualifying draw was key since the weather became such a factor so drivers who drew an early qualifying spot could go out when the temperature and track temperature was cooler had a distinct advantage.

Ed Carpenter Racing’s Spencer Pigot, who went out second, set the fastest time early on with a 4-lap average of 230.083 mph.  Pigot’s owner and fellow driver Ed Carpenter went out fourth and set a 4-lap average of 229.349 mph, good for seventh.  Ed Jones went out 16th and was the only driver to break 231 mph threshold but he couldn’t sustain it over the 4-laps and settled for an average 229.349 mph.  Jones currently sits sixth on the grid.

“The car’s fast,” said Pigot.  “I’m feeling pretty confident with the speed we were able to put up.  I was happy with the way we didn’t seem to slow down too much. It was a pretty consistent run.”

“It was a good run,” said Power.  “I could have used a little more, obviously.  I’m happy to be in the game.  I just didn’t get that first lap big number.”

Rookie Colton Herta put his No. 88 Harding Steinbrenner Racing Chevy into the 5th spot on his 2nd attempt of the day with an average of 229.478 mph, moving Ed Jones back to sixth.

Arrow Schmidt Petersen Motorsports James Hinchcliffe brought out the first caution flag of qualifying when his No. 5 Honda crashed on his first attempt.

"I don't know if we caught a gust or the wind changed or what," said Hinchcliffe.  "When it's windy and it's gusty and you're in low downforce for qualifying, unfortunately that's the risk you run."

Hinchcliffe was uninjured but the team was forced to go to his backup car.  Hinchcliffe made four attempts to get the backup car into one of the top 30 spots but couldn't so he will have to make the field on Sunday.

Two-time Formula One World Champion Fernando Alonso struggled to get up to speed with a backup car after wrecking his primary car during practice earlier in the week. Alonso set a time but then the McLaren team found a puncture on his right rear time.  The team withdrew his time to try and set a better time under better weather conditions but failed four times.

“It has been a difficult day,” said Alonso.  “It’s been a difficult week.  We went out about 1 o’clock, the conditions were okay, but we had a rear (tire) puncture at that time so we waited in the afternoon to see if the conditions were getting a little cooler and they did.  So, we took the chance on another two or three runs and we slightly improved the average lap, but it was not enough to be in the top 30 unfortunately so we have to try again tomorrow.”

Qualifying continues on Sunday with the Fast Nine Shootout as the cars that qualified in spots 1 through 9 re-qualify for a shot at the pole position and improving their starting spot.

The last row shootout also takes place as six cars will be fighting for spots 31, 32 and 33 meaning three cars will not make The Greatest Spectacle In Racing.