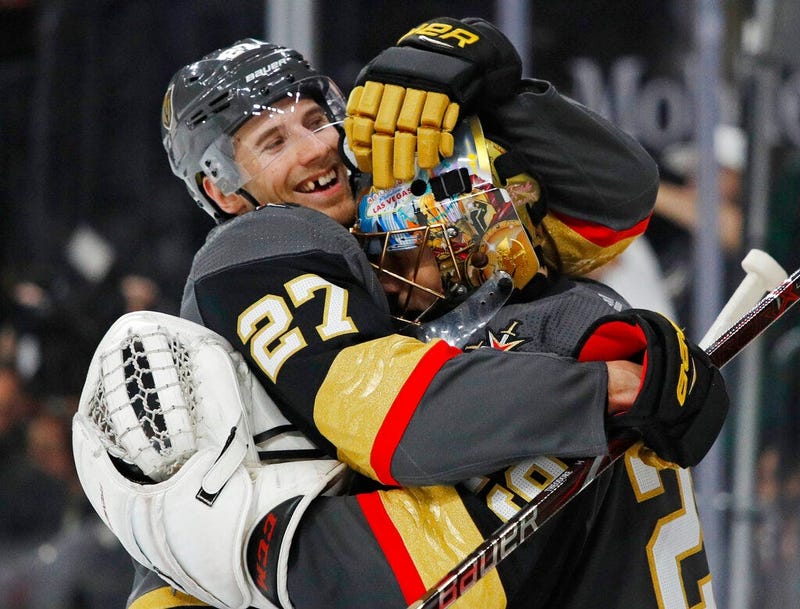 LAS VEGAS (AP) — Marc-Andre Fleury said his toughest task in the playoffs is simply finding the puck against a heavy-shooting team like the San Jose Sharks.

He found all 28 shots fired at him Tuesday night, and the 15-year veteran added another spotless performance to his storied postseason career.

Fleury earned his 15th playoff shutout, Max Pacioretty had two goals and two assists and the Vegas Golden Knights defeated the Sharks 5-0 for a 3-1 lead in their best-of-seven Western Conference series.

Fleury has stopped 87 of 93 shots in the last three games. He moved into a tie for fourth place in playoff shutouts and improved his career goals-against average in the postseason to 2.58.

Vegas can eliminate the Sharks from the playoffs for the second consecutive year on Thursday in San Jose.

"They're a good team. It's not over, obviously. It's a big game tonight, a big win for us," said Fleury, who also took over sole possession of seventh place with 78 career playoff wins. "They're dangerous. I think we've just got to go in, focus on our game, focus on the first period, nothing too far ahead, just focus on playing the right way."

Since losing Game 1 on the road, the Golden Knights have never trailed and they've outscored the Sharks 16-6.

The Sharks outshot Vegas 28-27. After the first two periods, San Jose had 15 shots on net from the slot, but Fleury's brilliance throughout the game was the difference.

"When you look at the game you can't put this all on the goalies because you have to score, too," San Jose coach Peter DeBoer said. "We have to find a way to solve Fleury. This isn't all on our goalies. We wouldn't have won tonight anyway 'cause we didn't score a goal. We've got to find a way to score and we've got to get some good goaltending, too."

The Golden Knights continued to hurt San Jose in the opening moments of periods, as Pacioretty's first goal marked the 10th time in 18 games they scored in the opening five minutes against the Sharks.

Mark Stone, who has energized the Golden Knights since arriving in February at the trade deadline, dropped the puck off for Pacioretty, who promptly snapped a shot through a screen just 71 seconds into the game.

Theodore made it 2-0 with the prettiest goal of the series. He skated into the zone and by Kevin Labanc, then faked out Brent Burns and skated between the All-Star and Brenden Dillon, through the slot and deked Jones before backhanding the puck just inside the pipe.

Pacioretty punched in his second goal of the night when he one-timed his own rebound off the post and into the net with 7:27 left in the second period.

The second line of Pacioretty, Stone and Paul Stastny has 28 points in the series, while the rest of the Golden Knights have 21 combined.

Tuch ended an eight-game goal drought when he gathered a long rebound, maneuvered through the defense and beat Dell to make it 4-0 with a little less than 14 minutes left.

Marchessault capped the scoring when he finished a nifty pass from Schmidt with 3:36 to go.

While coach Gerard Gallant remained critical of his Vegas team, he was pleased by the way his players stepped up on special teams, stopping San Jose on its four power-play opportunities.

"The goalie was the best player on the PK for sure," Gallant said. "Sometimes your goalie gets a shutout and it's a team shutout — tonight was a Fleury shutout."

NOTES: The Golden Knights are the first team in NHL history to score in the opening 90 seconds of four consecutive postseason periods. ... Tuch's goal marked the 13th time San Jose defenseman Erik Karlsson was on the ice when the Golden Knights scored. ... The Sharks were without injured center Michael Haley and defenseman Marc-Edouard Vlasic. San Jose center Joe Thornton served a one-game suspension for an illegal hit on Vegas left wing Tomas Nosek in Game 3. ... Stone became the eighth player in the last 30 seasons to have 10 or more points in his team's first four games of a postseason.

Game 5 in San Jose on Thursday.