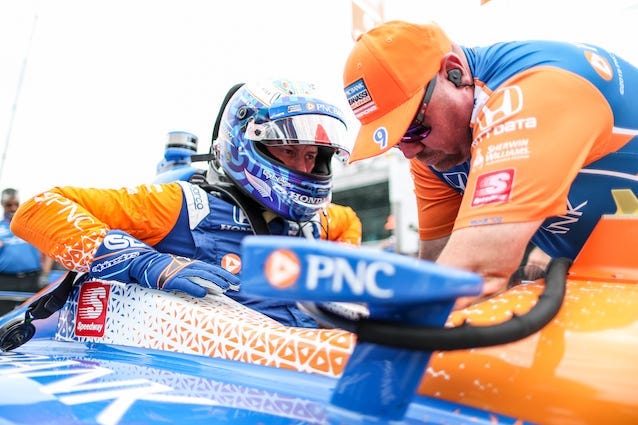 Speedway, IN (93.7 The Fan) – A frustrating Indianapolis 500 qualifying day on Saturday for Chip Ganassi Racing.  The top 30-starting spots were up for grabs with the top 9 starting spots being given the opportunity to fight for the pole position on Sunday.  Unfortunately, neither of Ganassi’s drivers will have that opportunity.

Weather played a big factor in what happened on Saturday as the ambient temperature was the warmest of the week at 85-degrees, which sent track temperatures soaring to a high of 127-degrees at one point in the afternoon.  Those track temperatures combined with gusty winds also made for unpredictable handling as teams tried to walk the fine line of dialing up just the right amount of downforce on the car without adding drag, which would sacrifice straight-line speed on Indy’s huge straightaways.

“We were very loose,” said Dixon, the 5-time and defending series champion.  “You could stay flat, but every time I turned in, you could just feel the rear sliding and just scrubbing speed off.  Conditions and the draw made a lot of difference.  If you went out early, the conditions weren’t as bad. It was 30-degrees cooler, and the wind wasn’t as bad.  We had gusty winds and the track temperature went up.”

Dixon wasn’t using the weather as an excuse for the 12-championship team.

“There were a few things we could have done better,” said Dixon.

Dixon’s crew went back to Gasoline Alley to work on the car and he went back out later in the afternoon where conditions were slightly better.  Dixon’s 4-lap average on that run was 228.100-mph, good for 18th on the grid.

“We‘re sitting in the top 20,” said Dixon.  “We’re in the show.  We are safely in, but that’s not why we turn up here.  We’ve had good speed in race trim, but qualifying speed we didn’t have.”
Walter Kuhn-IndyCar Series
Neither did his teammate Felix Rosenqvist.  Rosenqvist (pictured above in the the No. 10 car), who wrecked in practice earlier in the week, had a 4-lap average of 226.739 mph in the No. 10 NTT Data Honda, which put him in the field albeit temporarily.

“The laps went okay,” said Rosenqvist, a rookie this year in the IndyCar Series.  “I picked up a little understeer on the car.  There wasn’t anything I could do at the end.  I didn’t want to crash.  I just wanted to bring it home.  I’m very disappointed.”

The team worked on the car, withdrew Rosenqvist’s time and he went back out later in the day and turned an average of 227.198 mph.  The put Rosenqvist into the field but as teams continued to go out on track the team knew that speed wasn’t safe either and withdrew it and sent him back out a third time.

Rosenqvist found a tick more speed on that run to post an average of 227.297 mph, good for 29th, locking Rosenqvist into the 33-car field.

The team can now turn the focus on getting the cars ready to race while the top 9 spots battle it out on Sunday to determine the pole winner as well as the first three rows.

The six teams on the outside looking in will get a final chance to try to make the field as six cars will get one attempt on Sunday to fill the remaining three spots.