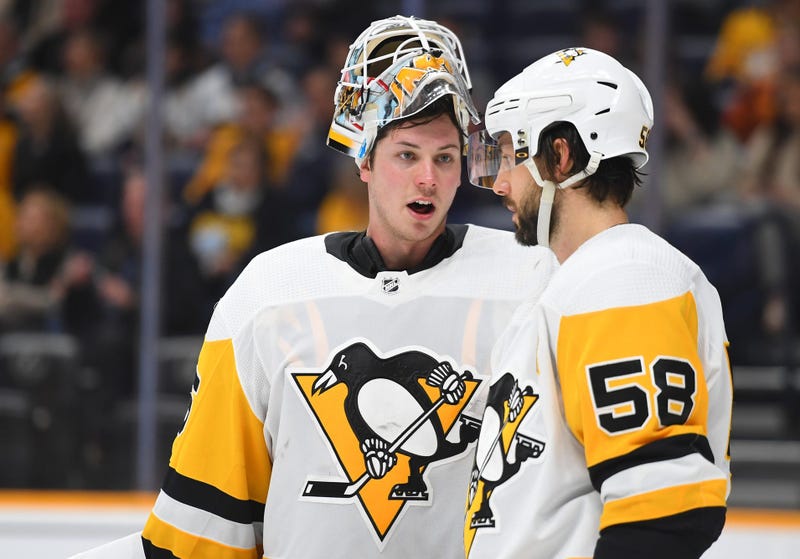 PITTSBURGH (93.7 The Fan) - As the Penguins ease through their bye week, the stretch drive of the season looms ahead, beginning with a Friday game here against the Flyers and a Super Bowl Sunday matinee in Washington for the first meeting between the teams this season. It’s Pittsburgh’s time of year.

Since missing the playoffs in 2006, the Penguins have excelled over the closing months of the last 13 regular seasons, nine times winning 20 or more of their final 34 games. They went 24-9-1 to close out coach Mike Sullivan’s first regular season behind the bench and then went on to win the first of consecutive Stanley Cups.

What should we be watching for over the final 32 games this season?

Rutherford has assets to deal, including what seems likely to be a very late pick in the first round of a good draft; veteran Alex Galchenyuk, who could fit better with another team willing to give him more ice time and take a flyer on his ability to help them produce more goals; and veteran forward Nick Bjugstad, who has played only 10 games this season due to an injury and without whom the Penguins have done quite well. Yes, the Penguins have traded five of their last seven first-round picks, several for returns that didn’t help, but in that timeframe the Penguins have reached the Conference Final three times and won two Cups, and there’s not a GM in the NHL who wouldn’t accept those outcomes. You can bet teams will be inquiring about high-end prospects Calen Addison, Nathan Legare and Samuel Poulin, and that’s where Rutherford obviously has to be careful. But going for it all this season is a no-brainer.

I’m not going to debate the merits of all the rumored targets you’ve heard about, because Jason Zucker, Chris Kreider, Tyler Toffoli, Brandon Saad et al (I’ll continue to suggest Rickard Rakell) can all help. Just remember that there will be plenty of competition for Krieder and Toffoli, who are about to become unrestricted free agents, and the Penguins would be dealing assets to a division rival for Kreider, which is always a factor; Saad (one year) and Zucker (three years) have term remaining, which has to fit into larger plans over the next few seasons which include planning for an expansion draft; and that the likelihood of Chicago or Minnesota dealing scorers is going to diminish if those teams get themselves in playoff positions.

This juggling act is likely to continue unless the performance of one of these guys just goes due south, and Sullivan has to continue getting it right and could be faced with a huge decision come the opening night of the playoffs. The fact that Murray has two Cup rings and Jarry’s never appeared in a single playoff game just adds to the intrigue, and Rutherford is uniquely qualified to help make this decision. Remember that this decision could heavily impact another that must be made by the summer of 2021, because the expansion draft means both Jarry and Murray can’t stay long-term.

The last time Marino, Schultz and long-time partners Dumoulin and Kris Letang were all in the lineup together was Nov. 4, when Marino played on the third pair with Jack Johnson and Schultz played with Marcus Pettersson. In those third pair situations, Marino was playing 16-17 minutes most nights and never exceeded 18 minutes except when Letang was injured Nov. 4 against Boston and departed with 14 minutes to play. Sullivan’s third pair over the last couple months has been getting just 13-14 minutes, and the Penguins won’t reduce Marino to that kind of playing time – even while he navigates the adjustment to playing so many games in a season, something all college players have to work through.

When Dumoulin returns, does Sullivan abandon his left-right symmetry and put Marino on the left side, where he played briefly alongside Letang, with Schultz as a partner? Does he play Marino on the third pair with Johnson and simply give his third pair more minutes? That will reduce ice time for Schultz and Pettersson and seems the most likely answer, but it’s something to watch.

We’ll know a lot about these possibilities by the trade deadline, by which time the Penguins will have twice faced the Capitals in Washington. Pittsburgh’s first five games out of the bye week will also tell us a lot, as after hosting the Flyers, the Penguins play four consecutive games against the best/hottest teams in the East: one against Washington, two against Tampa Bay and one against Florida. Three of those are on the road, and a rough spell there could put the Capitals out of reach.