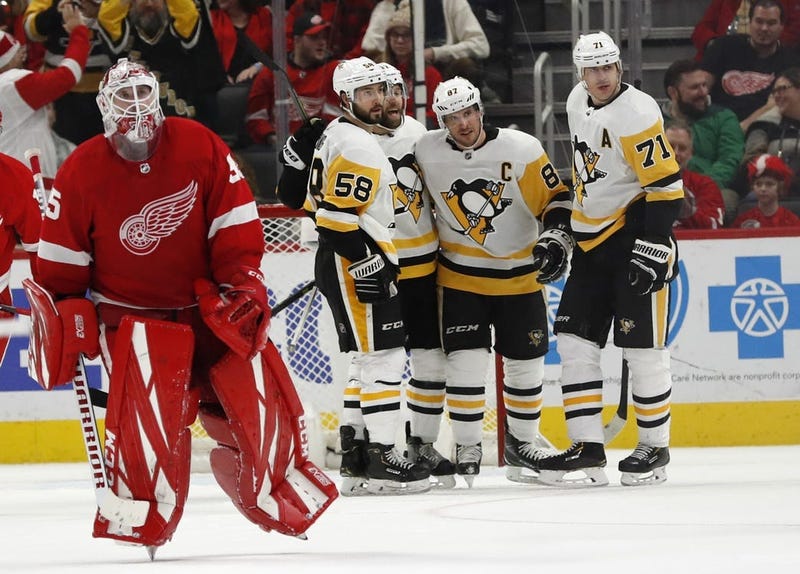 (93.7 The Fan) The Penguins’ power play is coming back. That’s a problem for everyone else.

While the Penguins have been buzzing along this season despite the injuries, writing one of the more impressive storylines in the NHL, they’ve been doing it with an average to poor power play – historically a major weapon in their arsenal.

But they’ve climbed from #22 to #14 in the league in the past two weeks, helped by Sidney Crosby’s return, and the power play now promises to be a factor in helping them challenge Washington for the top spot in the Metro – despite the absence of Jake Guentzel. Its resurgence comes at a time when the Penguins are about to begin playing their majority of their games in the conference (30 of the last 34) and in the Metro (18 of the last 34).

Crosby’s 28-game absence, along with the earlier absences this season of Evgeni Malkin (13 games missed), Patric Hornqvist (17 games) and Kris Letang (eight games), is the obvious reason why the Pittsburgh power play has struggled this season. The departure of Phil Kessel, who was at his most productive here when playing with the extra man, has also been felt.

But the return of Hornqvist in late December, followed by Crosby’s return, has set the stage for the Penguins to get back toward the efficiency they normally attain under Sullivan and his staff. Pittsburgh finished third, first and fifth respectively in the NHL on the power play in Sullivan’s first three full seasons, its top 5 finish a year ago coming despite ranking No. 21 in power play chances.

Pittsburgh now ranks No. 26 in power play chances, and Sullivan will be anxious for that number to climb now that his team is getting healthy. But he also knows the Penguins, when at their best, don’t need a ton of chances to influence games.

Pittsburgh is 4-for-11 on the power play since Crosby returned, and while its recent surge actually began a few games prior, his presence helps in both obvious and some under-the-radar ways.

When you add one of the game’s all-time greatest players, of course, you get Crosby’s vision for different kinds of passes, his finishing ability and his innate sense of where to find space and anticipate where the puck is headed. But you also get better entries, although we’ve not seen a lot of that yet, more puck battle wins along the wall and his incredible ability to pull pucks off the wall and distribute them to teammates with a quickness and ease for which he has no peer.

Then there’s his faceoff prowess.

Winning faceoffs in the offensive zone is a huge factor in succeeding on the power play, and he makes a noticeable difference there: the Penguins this season have won 50.7% of their power play faceoffs when he’s out of the lineup and 58.2% when he’s in – that’s a big difference. Always one of the NHL’s top faceoff men with the man-advantage, Crosby is sitting at 60.0% for the season, 13th among players with at least 80 power plays taken, and was No. 2 last season at 62.5%.

Hornqvist’s regular presence is also a factor historically, as the team converts 22.5% of its power play chances when he’s playing and 19.0% when he’s out, aided by his ability to unnerve opponents in front of the net while supplying something no one else on the roster can. And Bryan Rust, now a regular on the power play for the first time in his career, is moving quickly along the learning arc of playing on this first unit.

Look, the Penguins are going to feel Guentzel’s absence on the power play. But they’re now healthy enough to use it as a difference-maker on a nightly basis, and that looms as a major factor in keeping them in a race that looked over back on Dec. 4, when they were 13 points behind the Capitals. A victory today against Boston would push the gap back to four points.

Standings can change in a hurry.