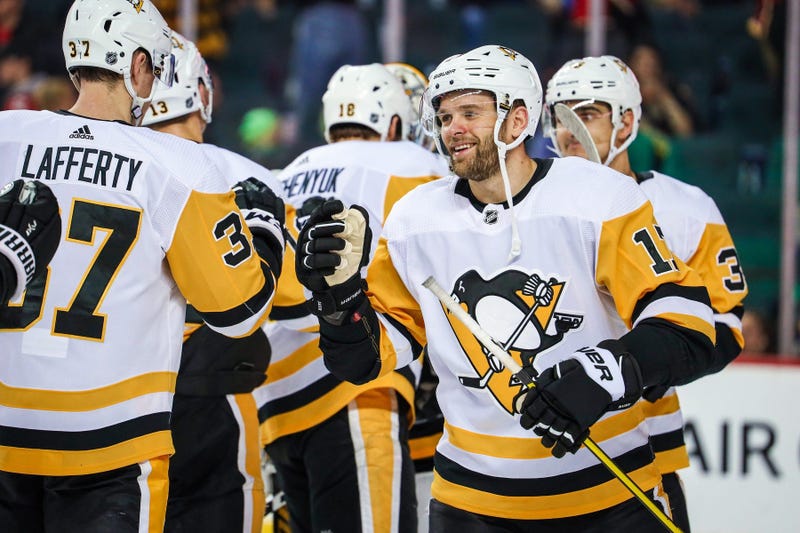 PITTSBURGH (93.7 The Fan) - The Penguins are just two weeks away from the midpoint of the 2019-20 season. They’ve already absorbed injuries to significant players, as Sidney Crosby has missed exactly half of their games and Evgeni Malkin has missed more than a third, and they’ll continue to be impacted at a minimum until Brian Dumoulin returns well into the new year. Their incumbent No. 1 goaltender is in a slump and can’t get playing time, and their special teams have either underperformed (power play) or fallen dramatically from a strong start (penalty killing).

Yet a win tonight in Edmonton and Pittsburgh is two points out of second place in the Metropolitan Division, which houses five of the top eight teams in the Eastern Conference.

There are two major reasons for the Penguins’ sneaky good performance, and I say sneaky in the sense that what they’ve done so far is not attracting a ton of attention outside Pittsburgh. But what they’ve done to date also sets them up, if healthy, to be a playoff disruptor in April.

Yes, he’s got some good depth to work with in a season full of injuries like this, with the Penguins set to hit 138 man-games lost tonight. He’s mixed and matched his lineup in ways that have worked consistently, and he deserves a lot of credit for that – as do the players who are making his plan come to life.

All the while, Sullivan has nevertheless been good at granting ice time as a function of performance. With holes in the forward lines, the struggling Alex Galchenyuk has largely gotten only the playing time he deserves, while Dominik Kahun was scratched in early November when he had been ineffective and then soon after was given 14-15 minutes a night because he was playing at a different level. That’s not easy to do when you’re missing a bunch of regulars every night.

But for me Sullivan’s best work obviously came during training camp and the opening weeks of the season, when it became clear he had found another way to deliver his message about making good decisions with the puck and playing harder without it. He said the same things last season to largely the same group of players without it ever soaking in, but he’s reconnected with his team this time around. That’s the foundation for the success they’ve had.

2. The emergence of three overachieving players.

There have been a lot of contributors to the team’s success, from Jack Johnson taking his game to a better level to Jake Guentzel pacing to deliver another 40-goal season to Malkin doing what Malkin usually does when Crosby is out. All great, but none of it really shocking. And yes, that does include Johnson, who struggled for most of last season but who was +23 with 23 points for Columbus three seasons ago and has played like this before in his career.

But Bryan Rust, John Marino and Tristan Jarry. . . all of them are performing at levels that couldn’t have been anticipated when the season began, levels none of them have hit before. And in doing so they’ve had major roles in putting this team on pace for 106 points.

Rust had shown an ability to produce big goals at big times in both the 2016 and 2017 playoffs, but he has never shown signs of being able to score at his current pace – he’s third in the NHL with 0.65 goals per game. He’s added the ability to regularly finish plays to a resume that already included speed and a solid north-south game, and he’s also shooting the puck a lot more; in just 20 games (yes, he’s also missed 14 games) he’s already reached half his shot total from his 72 games last season.

If the Oilers had known Marino’s game looked like this, they’d never have moved him, especially not for a sixth-round pick. Pittsburgh scouts loved Marino but even they have to be surprised at how solid his rookie season has been. He makes routinely good decisions, moves the puck well, skates very well, has some definite skills with the puck in the offensive zone and is good at making the defensive plays he’s expected to make in his own zone. He should be picking up Calder Trophy votes this spring.

Jarry has been nothing less than sensational, coming off a season in which he could only get two NHL games while falling behind Casey DeSmith on the depth chart. Jarry had shown flashes of being a potential No. 1 NHL goaltender back in 2017-18, but he still had questions about consistency to answer. He’s gone a long way toward answering them lately, playing in all but four of the last 15 games with no discernable drop in his level of play, which has been good enough to put him first in the NHL in both save percentage and goals-against average.

Sullivan’s impact will continue. How long can those three players keep doing what they’re doing before there’s a significant – some might say inevitable – drop in their play? Or, given the way they trashed pre-season assumptions, should we even assume it’s inevitable?