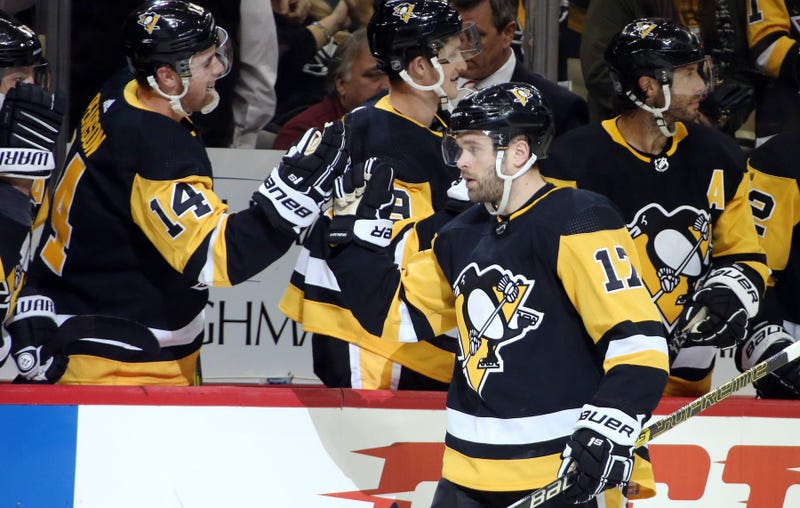 PITTSBURGH (AP) — Nick Bjugstad and Jared McCann will always remember their first game with the Pittsburgh Penguins and the whirlwind day surrounding their debuts.

The newly-acquired Bjugstad and McCann made it to the arena minutes before puck drop, and new teammates Bryan Rust and Jake Guentzel each scored twice to help the Penguins beat the Ottawa Senators 5-3 on Friday night.

“Showing up at game time was interesting and might have been better for us because there wasn’t much thinking,” Bjugstad said. “It was pretty surreal. We showed up to the rink and just played. I have dreams every once in awhile where I’m late to a game and that’s kind of what it felt like, but luckily it ended up well, so it was good.”

Teddy Blueger got his first NHL goal and Casey DeSmith stopped 37 shots as the Penguins won their second straight after losing four of their previous five.

Bjugstad contributed in his first game with the Penguins hours after he was acquired from Florida, getting an assist on Rust’s first goal. He also won the offensive zone faceoff and provided a screen in front on Rust’s second goal.

“They told us to keep it simple and that’s kind of what we did,” Bjugstad said.

Bobby Ryan and Mikkel Boedker both scored power-play goals, and Matt Duchene scored on a breakaway for the Senators, who rallied to make it a one-goal game after falling behind, 4-1. Anders Nilsson stopped 35 shots as Ottawa, playing for the first time since Jan. 22, lost its third straight.

“I think we knew they were going to press because they knew we were coming off eight days,” Ryan said. “They got the lead and kind of just stuck to their guns, putting pucks to the net and doing things to wear guys out.”

Earlier in the day, the Penguins acquired forwards Bjugstad and Jared McCann from the Panthers for forwards Derick Brassard, Riley Sheahan and three 2019 draft picks. The deal gives the Penguins an influx of youth in the 26-year-old Bjugstad and the 22-year-old McCann as they make another playoff push.

“We felt like they could fit into our lineup and play certain roles that could help us become a better team,” Penguins coach Mike Sullivan said. “I thought they had strong games under difficult circumstances.”

Bjugstad and McCann both took the morning skate with the Panthers, and boarded a plane to Pittsburgh when they learned of the trade.

“We’ll always remember sitting on the plane, wondering if we were going to make it,” Bjugstad said. “We got to a point where we were like “alright, we better start doing something,” so we did a few groin stretches in the plane. There wasn’t much room, but that was about all we could do.”

Bjugstad and McCann received a police escort and arrived at the arena minutes before faceoff, still with their Florida Panther equipment bags as they hurried to join their teammates on the ice. They first appeared on the bench prior to the start of the national anthem.

“Usually I have my coffee and do some stretches, but I didn’t have any of that,” Bjugstad said. “We got here, threw our gear on and ran out for the anthem.”

With Evgeni Malkin out of the lineup, Bjugstad centered the second line, while McCann was the third-line center. Malkin, who recorded his 600th NHL assist on Wednesday, will also miss Saturday’s game at Toronto with an upper-body injury.

Bjugstad played a role on two of the first four goals as Pittsburgh held a three-goal lead in the third period. Both Bjugstad and McCann will be happy to have additional time to prepare Saturday against Toronto.

“You can’t make this up,” Bjugstad said. “It was good to get the win most importantly, but I think I’ll remember this one for the rest of my life.”