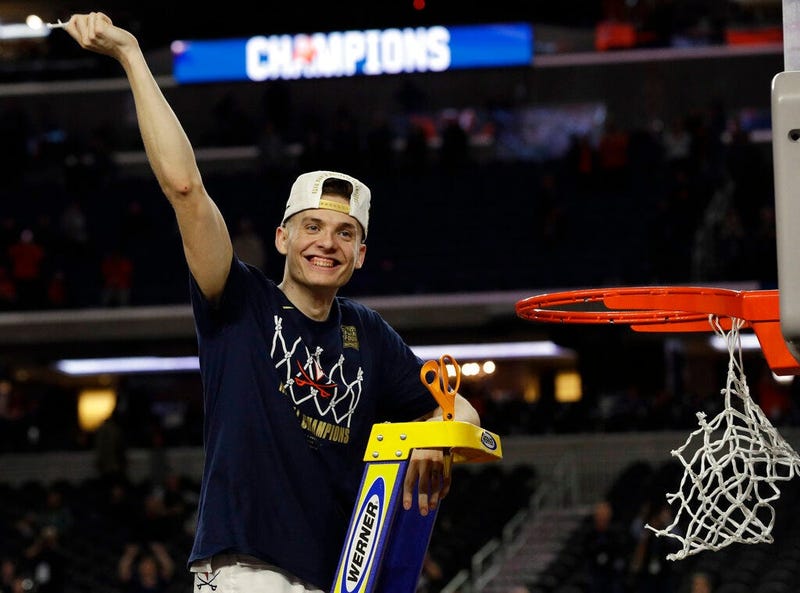 MINNEAPOLIS (AP) — The questions kept coming at Kyle Guy as he tried to make his way through a clogged court to join his Virginia teammates celebrating the program's first national championship.

"I don't have the words, man," Guy said to one person as he kept side-stepping and inching his way forward through the crowd. "I don't."

He didn't need them, really. He had his perfect ending already standing amid the confetti with a piece of clipped-down net stuffed into hat. A year after a humiliating tournament exit against 16-seed UMBC — followed by death threats and his open discussion of battles with anxiety — Guy was the Final Four's most outstanding player for a Virginia team that finally had the title many said it couldn't win with its conservative offense and pace of play.

"It hasn't set in yet," Guy said in the locker room. "I'll start crying when it does."

Guy scored 24 points in Monday night's 85-77 overtime winagainst Texas Tech, a match of defensive-minded teams that instead spent much of the game trading big shot after big shot. Guy finished 8 of 15 from the field and 4 of 9 from 3-point range, providing a start-to-finish dose of scoring while teammate De'Andre Hunter took the lead after a quiet first half to finish with a game-high 27 points.

The 6-foot-2 junior from Indianapolis never let some shaky NCAA Tournament showings scare him away from taking — and making — the shots the Cavaliers so desperately needed.

"I'm a confident player and my teammates, they feed me a lot of confidence," Guy said, adding: "I'm going to shoot whether it's falling or not. I don't really ever feel out of rhythm."

He had looked that way in the first three tournament games, making 8 of 38 shots (21.1 and 3 of 26 from behind the arc (11.5%). But he had come up with huge moments in the Cavaliers' last three games, starting with 25 points and 10 rebounds in the overtime win against Purdue in the Elite Eight.

He had 15 points in the national semifinals against Auburn, including a critical late 3-pointer with the Cavaliers trailing by two-possessions followed by an even more pressure-packed moment when he was fouled on a 3-pointer with 0.6 seconds left.

With more than 70,000 people watching his every gesture and expression, he calmly sank all three to give Virginia the 63-62 win and a second straight tournament escape.

This time, he was sharp from the start against the Red Raiders, scoring 10 in each half before going 4 for 4 at the line in the extra period as the Cavaliers finally broke free in a tense game.

"That's what he does: he shoots the crap out of the ball," said teammate Ty Jerome, who penetrated to zip a one-handed pass to the far corner to set up one of Guy's second-half 3s. "If Kyle's open for a split second, I've got to put that ball right in his pocket."

He also played all 45 minutes, the only player for either team to do so.

"He can play all night," teammate Kihei Clark said. "He really moves on offense. He never really gets get tired. And then to play defense on them just shows you the kind of player he is. We have a bunch of great players, but when Kyle is making shots, it fuels us on defense."

And Guy certainly was ready to savor the moment when it came. With Braxton Key at the line with 7.8 seconds left for clinching free throws, Guy stood with Jerome and Hunter out close to midcourt, the trio with their arms around each other at midcourt to share the building excitement.

This was the moment Guy had dreamed of for the past year that had followed that still-incomprehensible loss to UMBC — the first time a No. 1 seed had lost to a No. 16 in tournament history. Guy had been open in social media posts in the week that followed about the fallout from that game, from death threats towards the players to openly discussing that he had been taking medication for anxiety attacks.

He had kept that UMBC loss right in front of him, too, in the form of a Twitter avatar photo of him staring at the court with his hands on his knees as the Retrievers celebrated that unprecedented win. (And yes, he's going to change that photo now).

It was just one way the UMBC question had dogged Guy and the Cavaliers. They patiently answered every time, though the questions became more frequent once the Cavaliers finally got to the NCAA Tournament again. And coach Tony Bennett has told his team that everyone would watch to see how they responded.

By Monday night, Guy and the Cavaliers had the final word.

"I'm all ears: they can say what they want," Guy said. "I'm a national champion. You can't take that away from me."