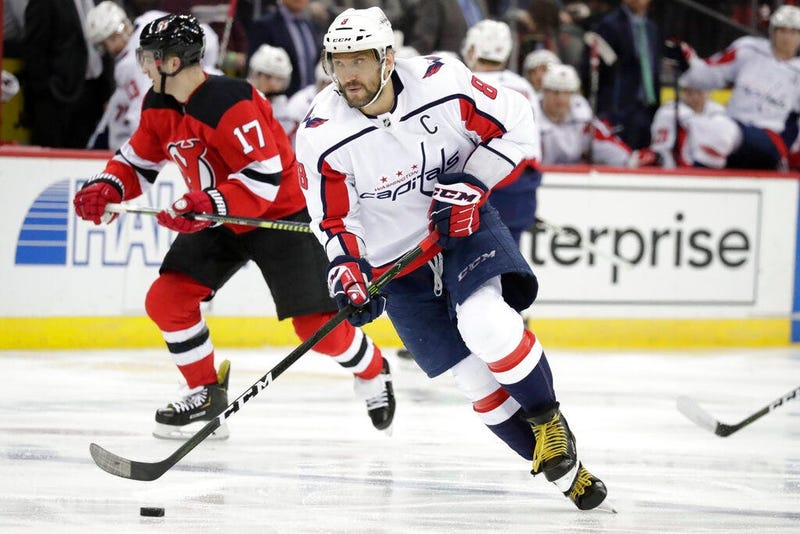 WASHINGTON (AP) — Alex Ovechkin scores 50 goals a season so often the historical significance of it almost gets overlooked.

The Washington Capitals' captain is one away from becoming just the third NHL player with eight 50-goal seasons, joining Wayne Gretzky and Mike Bossy. If and when it happens, it'll be just the 21st time any player has reached 50 goals in a season since Ovechkin entered the league in 2005-06.

Fifty has become Ovechkin's number to shoot for, even though it's an almost-unreachable milestone for everyone else. The Russian superstar owns the past three 50-goal seasons and at 33 years old could become the oldest player to reach that mark since Phil Esposito in 1975.

Ovechkin has led the league in goals seven times, won the Conn Smythe Trophy as playoff MVP and captured the Stanley Cup. He's showing no signs of slowing down.

"I think he's speeding up," said Winnipeg Jets winger Patrik Laine, who idolizes Ovechkin and finished second to him in goals last year. "It's been fun to watch."

Current and former teammates and players and coaches around the league can only marvel at Ovechkin's accomplishments. His 646 goals are tied for 13th all-time and are 212 more than the next-closest player — rival Sidney Crosby — during the past 14 years.

"It's obviously not too difficult for him," said Tampa Bay Lightning captain Steven Stamkos, who owns two of the 50-goal seasons since 2005-06. "He's found a way to consistently produce in this league. He's a horse out there. He's a big, strong guy. His longevity has been amazing in terms of staying healthy and staying out on the ice and just producing."

Ovechkin didn't always produce quite like this. He had 32 goals and 65 points in 2011-12, the lowest outputs of his career in an 82-game season.

Then Ovechkin adjusted his game to how opponents were defending him, scoring 51 in 2013-14. Under coach Barry Trotz from 2014-15 on, he became more of a complete player — while continuing to score.

"His all-around game is night and day, as it is with most young players that come in," Jets coach Paul Maurice said. "You've got a legend, right? You get to watch him still looking to be in his prime but with the seasoning and maturity of playing the team game now."

Better team play also helped Ovechkin score more. He plays with skilled playmaking centers like Nicklas Backstrom and Evgeny Kuznetsov, and then he adds a seemingly unstoppable one-timer from the left faceoff circle on the power play and a combination of power and strength rarely seen in this generation.

Bruce Boudreau, who coached Ovechkin from 2007-2011, said this goal-scoring pace is more likely to continue unlike others who rely on skating to produce offense.

"He's going to do it forever," said Boudreau, who now coaches the Minnesota Wild. "He, from the blue line in, will be and always will be in my mind the greatest scorer in history."

Capitals fans serenaded Ovechkin with chants of "We want 50" after he scored his 49th on Tuesday against Carolina. He had a chance at No. 50 with the puck on his stick, but instead of shooting it into an empty net, he passed it to Backstrom and said afterward, "Next game."

The Capitals' next three games are on the road, giving different crowds the chance to see Ovechkin's latest piece of history.

"The fans (in Washington) are treated to every time the puck's on his stick, it has a chance to go in the net," Lightning coach Jon Cooper said. "Some organizations are blessed that in an era you get to witness the same player every night and marvel at what they do."