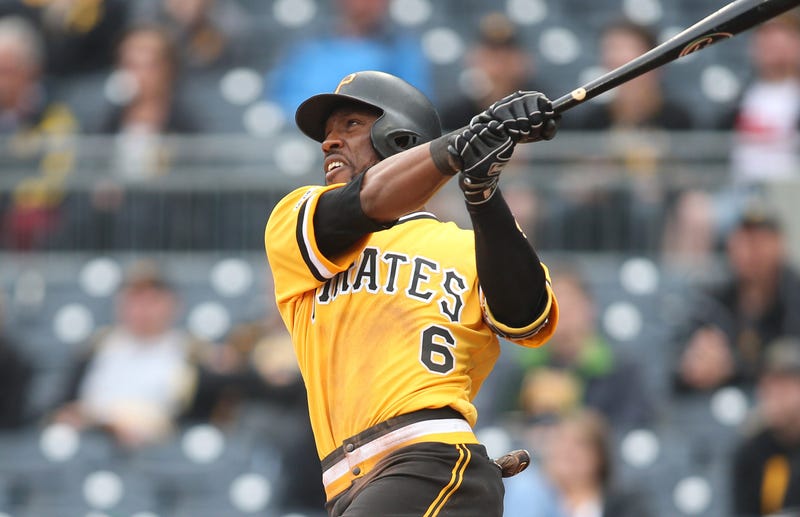 Sunday was another one of those beautiful moments that only baseball can bring.

With one out in the bottom of the 13th inning, with runners on the corners, down 3-2 in an almost 4 hour long game, Starling Marte jumps on the first pitch he sees from crooked-capped reliever Fernando Rodney and sends it over the wall and into the Pirates bullpen for a 5-3 walk-off win in front of the Pirate diehards still in the seats.

Jubilation at the plate.

Those are the kinds of things you want to see from the Bucco centerfielder, coming up in a big situation to deliver a victory for his team. These are the moments that give you hope in him.

But the problem is that you don’t see those things enough from Marte. He’s really had an enigmatic professional career to this point.

Some days he looks like a world beater, one of the best in the game today and other days he looks completely lost and disinterested.

So as a fan, how should you feel about him? Should you root for him to finally reach his potential or be frustrated by his inconsistencies and checkered past?

Marte brings a rare skillset to the field in which he is can be considered a “five tool” player. He can hit for average and some power, he can be a terror on the base paths, he’s got a cannon arm and can play Gold Glove defense.

That’s pretty easy to root for.

BE FRUSTRATED BY HIM:

But here’s the other side.

Marte has never quite reached his full potential as a Pirate. There are times where he looks disinterested in the game, where he has a mental lapse on the bases or in the outfield. He has at-bats where he goes down on three pitches while swinging at everything he sees no matter where it ends up in relation to the strike zone.

Pirates’ management has noticed it, too. Pirates’ president Frank Coonelly said this from Spring Training this year when he joined The Fan Morning Show, talking about the conversation they had with Marte this offseason.

“With Starling it was very clear. You can be and should be the best player on the field and we’re talking our team [and] the other team, most time we play a baseball game. We don’t always see that and we need to see that virtually every game that you play. That was the word going out of the camp.”

They can see the talent hasn’t quite reached its capabilities. They’ve done all they can to try to get the most from him.

“Coming back in, we’ve seen a very motivated Starling Marte. I’m looking forward to him having a really good year this year because all the talent’s there, all the tools are there, we’ve seen them, they’ve played out. Obviously, he’s a multi-time Gold Glove winner, power is there, steal bases, hit home runs, he can do things on a baseball field that few people can do. He’s now the centerfielder so he’s got those responsibilities to be the leader of our outfield. We’re looking forward to Starling Marte being a big part of the success of the 2019 Pittsburgh Pirates.”

Oh, and his teammates have noticed it, too. Fellow outfielder Corey Dickerson said this in Spring Training this year as well.

“I try to challenge him, that’s the biggest thing I try to challenge him in the right way where he doesn’t get the wrong feedback from it and it’s encouraging to him. He’s probably one of the most talented players in the league. Easily could be a top 5 player because people don’t see what he does in practice on a day to day basis, how talented he is. He just has to put it all together and want it.”

If he could just get it together more consistently, come in giving full effort every day, who knows what Marte could accomplish.

And then there’s the really ugly part in Marte’s past.

Marte had to leave the team and wouldn’t have been able to participate in the postseason either had the Pirates gotten there.

This option seems rather harsh, as players have served suspension time for PED’s in the past and have been relatively forgiven. But there’s no doubt Marte’s absence had a great impact on a 2017 season in which the Pirates only won 75 games.

Regardless of your feelings as a fan toward him, this feels like a pivotal point in Marte’s career.

He’s 30 years old. He is supposed to be a leader on the team. He was told in the offseason he needs to be more consistent on a game-to-game basis. He has teammates encouraging him to do so.

There has never been a time in which Marte has been more in his prime and (hopefully) more motivated than this season. We should be seeing the best of Marte this year.

2019 has been interesting for him so far. He collided with shortstop Erik Gonzalez and was sent to the 10-day IL already (he joins a long list of Pirates to go on the IL this year). After Sunday, he now has hit 3 homeruns in extra innings, showing off his ability to come through for the team in clutch moments. It’s exactly what you want from a “star” player who is a leader of your team.

But he’s also only hitting .211 and that’s clearly not going to be good enough throughout the season.

It feels like if it doesn’t happen now…if things don’t come together to where Marte is focused, is one of the best players on the field every game, puts all five tools on display throughout the entire season and shows the desire and passion you want to see from him, where he truly becomes a superstar in the league…

When will it ever?