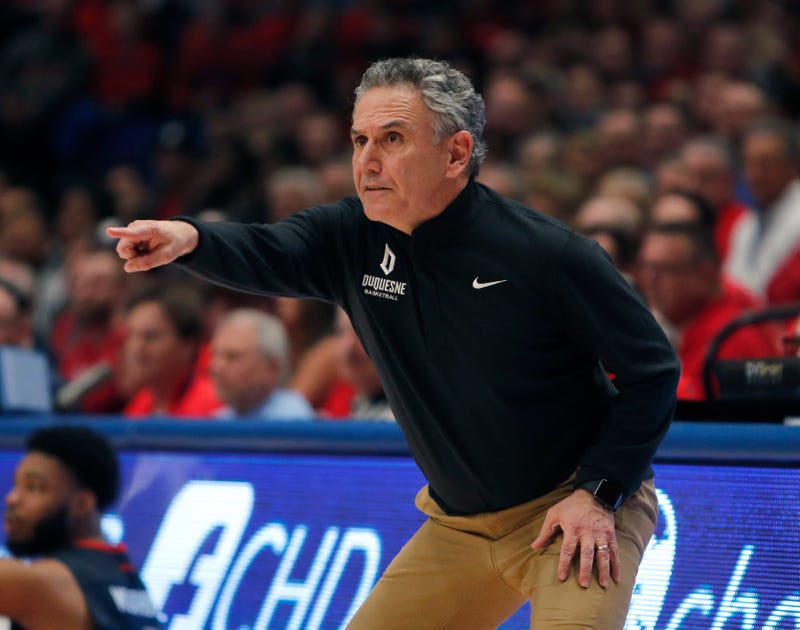 PITTSBURGH (93.7 The Fan)- There will not be a "City Game" between Pitt and Duquesne basketball again during the 2020-21 season.

Duquesne head coach Keith Dambrot joined The Fan Morning Show Friday and expressed his disappointment in what he thought were plans to have the game scheduled falling through.

"Big picture, it hurts Pittsburgh basketball. It hurts the people of Pittsburgh who get excited about the game, it hurts the fans. Most importantly, I think if you polled all the players from both teams, they'd want to play. So, that's probably my biggest problem with the whole thing.

"Secondly, they (Pitt) agreed to the game last year when they cancelled it last year, said they were going to play this year. Now, coach Capel never did, but Heather Lyke did. And so like if you make that commitment then you should live by it."

Dambrot was miffed by the mixed messaging involved from the Pitt side of things and doubts the future of the series.

"They just didn't really want to play, I mean, it's as simple as that. Had they said, 'in our risk/reward analysis this decision didn't make sense,' I could live with that. Coach told me it was a date after exam week so we had over a year to schedule a date, we could have played any date. Heather [Lyke] basically said, who I've known for years, she was at Eastern Michigan and she's an Akron law school grad so I've known her a long time and have a lot of respect for both of them.

But Heather basically said, 'Well, we have 20 ACC games. We have the ACC-Big Ten Challenge. We have Myrtle Beach [tournament]. But really that doesn't change next year, either. The perimeters are the same every year. The fact is they just didn't want to play this year. Which is ok, just say that."

Dambrot certainly doesn't want to get petty with this situation either, for the good of all involved.

"We could sit here and get stubborn and hold a grudge. But really it's in the best interest of Pittsburgh and the fans of Pittsburgh and both schools. So I'm going to try not to do that. I don't really have any grudges, I just want to be treated fairly that's all."

That being said, Duquesne does need to evaluate if this is something they want to continue to pursue as well.

"They're controlling the relationship. We're like a suitor chasing a potential wife and the woman really isn't interested in us. I mean at some point they're just taking their ball and leaving and it's up to them really now. We have to decide if we're going to continue to play that game or just move forward and play somebody else."

Dambrot also provided insight into why Duquesne hasn't played Robert Morris since he's been in charge.

Now I will say that I think we should only play at Duquesne and we should pay the guarantee because most Atlantic 10 teams don't play NEC teams on the road. Now, I'm not saying we're better than Robert Morris because clearly they've beaten Duquesne more than Duquesne has beaten Robert Morris. I was the first guy to text coach [Andy] Toole when he went to the NCAA Tournament because I was really happy for him.

It would be hypocritical for us not to play Robert Morris."

You can hear the entire interview with Duquesne head basketball coach Keith Dambrot on The Fan Morning Show, below.
___Follow 93.7 The Fan: Facebook | Twitter | InstagramListen to 93.7 The Fan on the Radio.com App - Download Now