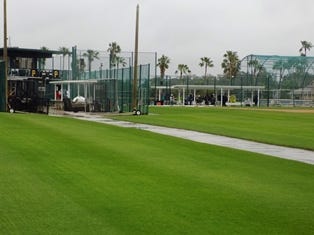 Bradenton, FL (93.7 The Fan) - The first official workout for Pirates pitchers and catchers came on a chilly, rainy morning, forcing the players to work indoors at the Pirate City complex.

Dreary can also up the second half of Chad Kuhl's 2018 season.

With more than 30 pitchers beginning their quest to end up in Pittsburgh, Kuhl has a different perspective. A member of the rotation the past three years, he's 5 months removed from Tommy John surgery and will sit out the season.

"The toughest part ahead for me is watching my team, knowing I can't help," Kuhl said the day after throwing a baseball for the first time since the surgery.  He came away encouraged. 'I feel great.  I was expecting to wake up and have some soreness.  I really don't feel anything.  I'm pain-free.  Throwing felt great, so I'm in a good spot."

That wasn't the case last June.  Kuhl knew something wasn't just right with his right elbow, but had hoped to pitch through it.

"Even the day of the surgery, I could play catch," Kuhl said. "I could go out to 120 feet and throw.  It just got to the point where if I tried to throw hard that's when  I was really feeling my pain.  I could play catch and throw all day long, but the second I tried to really get on it was when I felt that pull and that tug on my UCL."

As Kuhl looked around the clubhouse, he pointed out that Jameson Taillon, Nick Kingham and Nick Burdi underwent the same surgery.  Also, Edgar Santana will rehab alongside Kuhl after having Tommy John in October.

"It's kind off commonplace, unfortunately, in our game today," Kuhl said. "We know how to attack and rehab it better than ever."Kuhl plans to spend the majority of the season at Pirate City, but will visit his teammates in Pittsburgh on occasion.