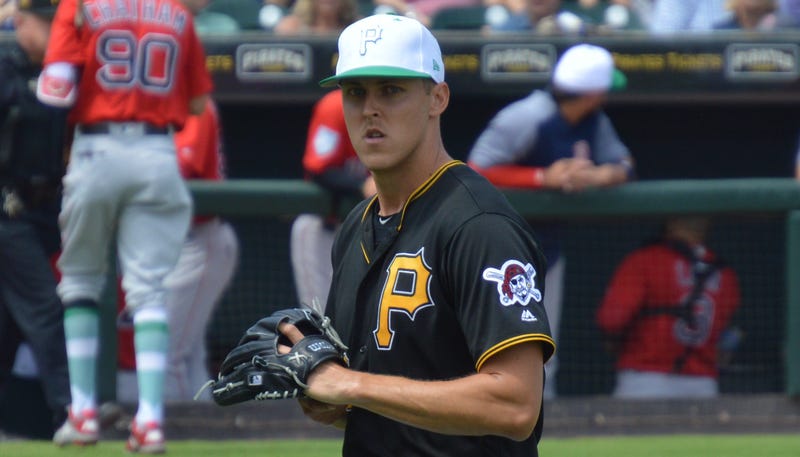 BRADENTON, FL (93.7 the Fan) – Jameson Taillon has now had over a month to think about Thursday’s Opening Day start against the Reds and the righty says finally it’s real.

“I’ve heard it’s going to shut the city down and it’s gonna be packed,” Taillon said of what he expects in Cincinnati.  “I heard it’s kind of a holiday there.  The buzz around it will be cool.  I think it will be exciting and once you throw that first pitch, it kind of settles down, the buzz stops and it’s just another game.”

The Pirates righty is coming off a career-high 14 wins and an ERA of 3.20, which was 9th in the National League.  Taillon said he has had a productive spring and a good mix of working on stuff and getting ready for the season.  He believes he’s in a good place.

The defense behind him won’t be the same, the Pirates adding shortstop Erik Gonzalez, the return of Jung-Ho Kang and either Lonnie Chisenhall or Melky Cabrera in right.  Taillon notes the other two outfielders are gold-glovers.

“I’ve really liked having Gonzalez playing short for me this spring,” Taillon said.  “Jung-Ho has made some great plays at third.  I’m excited to see what Frazier can do playing every single day.  That dude is such a good baseball mind and a gamer.”

The 27 year-old said being named the Opening Day starter, or ace, hasn’t changed anything with him.  He’s attacked everything the same way as before, saying all of that stuff is just a title.  He keeps his head down and works.  And that’s the same with the other three main guys in the rotation, Trevor Williams, Joe Musgrove and Chris Archer.

“We will definitely lead by example we work together and communicate really well,” Taillon said of their leadership role.   “I hope people can pick up on that and start taking it into the cage or into defense or whatever they do.”

“I think the biggest thing is we lead amongst each other.  Hopefully that is contagious, but we aren’t setting out to be world beaters.  We don’t take the field every day, so we need some position players to step up and make their voices heard.  What we do is just quiet, workmanlike mentality.”

Taillon admits he does peak at what people are saying about the Bucs.  However he wants you to make your mind up after watching them play.

“Our goal is to make people believe,” Taillon said.  “They might call us crazy right now in spring and then hopefully we get people on board and they start believing what we are thinking and what we are working on.”