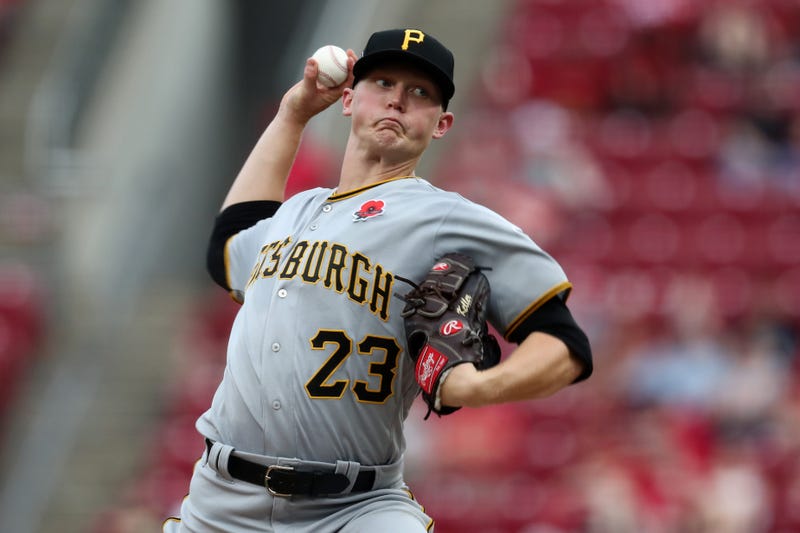 PITTSBURGH (93.7 The Fan) - Pirates Starting Pitcher Mitch Keller made his Major League debut in Game 2 of the Memorial Day doubleheader in Cincinnati and after a rough 1st inning he settled down and got through four innings.

The Pirates sent him back down to Triple-A and he is knocking back on the door of the Major League's after his last two outings, including his start for Indianapolis Friday night where he pitched 5 shoutout innings and struck out 13.

"It was simply unreal and you know Tyler Glasnow was here for a couple year's and he had similar outings to that especially when he came back down after being in the Pirates bullpen and kind of went back into the rotation and was dominant," said Kappes. "The night actually didn't get off to a good start for Mitch, he gave up a leadoff single to the first batter he faced...and then he walked the next two guys so he had bases loaded nobody out and then he went on to strikeout 12 of the next 13 guys."

The media asked Keller after the game Friday, kind of in a joking manner but somewhat serious, about what happened in the first inning.

"He said he actually couldn't see Christian Kelley, like literally couldn't see him, his catcher, because the sun was setting," said Kappes. "They have gates here, in Toledo, Ohio, right behind home plate, the sun was shining right in his eyes and he was kind of on his release point in that first inning just throwing a little bit blind. Which is kind of scary to think he still had the success that he did striking out the side with the bases loaded, but once the sun set behind the gates there he was just light's out, they couldn't touch him and he was throwing all four of his pitches for strikes."

So, Is Keller ready to return the big leagues and will he be successful?

"I think he's ready, but I think it's not the worst thing in the world if he gets a little bit more seasoning," said Kappes. "Because the one thing that we've seen with young guys, even at this level, is that old adage everybody's got a plan until you're punched in the face. And Mitch got here last year and I think he had gotten by on a lot of his stuff at the Low-A, High-A and Double-A levels. He got here and you're facing guys that have been in the big leagues and in some cases have been in the big leagues and have had success for quite awhile..."

Kappes went on to say about what Keller has learned at Triple-A, "...he didn't have that success right away and I think he struggled with that at first, with that little bit of adversity that he had never faced and he finally kind of figured out how to get past that this year and I think he's ready, I think you can put him in that rotation, I think what you saw from the final three innings in his debut at Great American Ballpark is the real Mitch Keller and not really that first inning...A little bit of seasoning wouldn't hurt, but I also think that he could succeed if he went up there to Pittsburgh."

Dan and Andrew also discuss the slider that Keller has been working on, how that has been working with his entire pitch arsenal and how his pitch sequencing was really good Friday night and what the coaches at Indianapolis are saying about Mitch Keller's readiness for the Major League's.

They also discuss the pitching depth at Indianapolis, who is ready to help the pitching staff of the Pirates and how did Corey Dickerson and Jung Ho Kang, along with some of the other position player prospects, have looked with the Indians.

Listen to the entire interview with Indians Play by Play Broadcaster Andrew Kappes below: