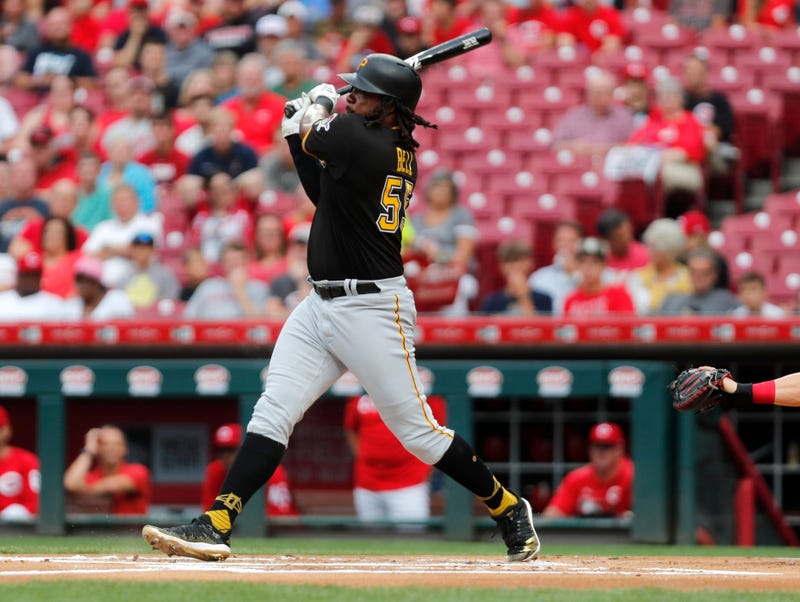 The word has been adopted by the Pirates as a nickname for All-Star closer Felipe Vazquez.

They even made a t-shirt about it.

Since the All-Star break, only teams with home yards that see baseballs fly out of them regularly in the Rockies and Reds have been worse in the National League in team ERA (5.19), opponent slugging percentage (.481), OPS (.810) and total bases (291). No team in the NL has given up more home runs (34) in the second half than the Pirates.

To top it off, the Pirates 3.94 run support average per start is tied for the NL’s worst as well.

Talk about a nightmare.

And it’s left the Pirates “Nightmare” smack dab on the trade block.

I don’t know about you but I’m ready.

I’m ready to shake things up.

Since the Pirates won 98 games in 2015 and made their third straight Wild Card appearance, we’ve seen nothing but mediocrity from this team. Just about every year we’ve been told that “this team can compete” or something like “the pieces are in place to contend for this year and beyond.”

What they have to show for it is 78, 75 and 82 win seasons. As a Pirates fan, I’m done with the middling. I want full commitment toward building another legitimate contender.

The first step of that is to all-out sell at Wednesday’s trade deadline.  There’s never been a better time to tear it down and build the system back up.

If there has been one thing on display this season, it’s that the Pirates are severely lacking in pitching depth organizationally. I don’t need to go into the exploits of Alex McRae, Montana DuRapau, Clay Holmes and Geoff Hartlieb do I? I could probably go on…

Yes, the Pirates will most likely be able to move Melky Cabrera, Corey Dickerson (if teams aren’t scared off by his health concerns) and Francisco Liriano before Wednesday’s deadline. The haul back likely won’t be all that impressive.

I’m thinking bigger than that. I’m looking at just about every asset as tradeable at this point. There are really only two names at the Major League level that I wouldn’t deal: Bryan Reynolds and Kevin Newman.

That’s it. Everyone else should be one the table. Yes, even a certain young Pirate currently with 27 HR’s this season. We’ll get to him.

The “Nightmare” mentioned previously should be the most intriguing name to dangle. The rumors swirl around Vazquez and a potential trade to the Dodgers, as LA is eyeing up yet another NL pennant and looking for left-handed bullpen help.

The Dodgers are just crazy enough and their minor league system is just lush enough that a major deal could take place. Reports say that talks have been bogged down by the Pirates demanding Dodgers top prospect Gavin Lux in the deal but I commend Neal Huntington for his high asking price. For now.

The Pirates-Dodgers talks about Felipe Vazquez currently bogged down in part because Pirates want No.1 prospect Gavin Lux and the Dodgers want to keep him.

He should want to get top dollar for Vazquez because there aren’t too many All-Star lefty closers floating around Major League Baseball. But make no doubt about it; the Pirates need to trade Vazquez.

If he is on the roster to start the 2020 season, they’ve potentially missed their best opportunity to get the most value out of him as possible. His best value, to the Pirates, is a heaping haul of prospects. His best value is NOT pitching in the 9th inning for a team that isn’t going to contend this year or beyond, really.

Aside from Lux, highly-touted catching prospect Keibert Ruiz has been rumored in a potential deal, as well as top pitching prospect Dustin May. As long as those players are in the deal, along with some complimentary pieces, I take the deal.

I thought about this one for a while as the trade deadline approached. In a hypothetical situation in which the Vazquez trade was done elsewhere, say the Dodgers offered the same or a similar package of top prospects for Bell…should the Pirates take it?

In other words, should the Pirates take a team’s top prospect package for the HR Derby participant?

The answer I came to is yes. Despite the historically good start to this season, the reality is that Bell has played two and a half months of elite level baseball in his career. Before this, he showed promise as a rookie and then followed it up by hitting only 12 home runs last season.

His second half numbers are frightening. A .170 batting average with just 2 RBI and homerless. If Josh Bell isn’t one of the league’s best sluggers, you’re left with a uncertain young player who, as evidenced by some of his throwing errors lately, is a liability defensively.

If a team comes calling with top prospects, particularly one of two to replace that power source…I’m in.

Do I think the Bucs will be able to move him at the deadline? Not really, because I don’t think there is a high demand for top-end outfielders right now with a more hefty cost.

Should the Bucs shop him and trade him in the offseason? Absolutely.

If a 30 year-old outfielder is having a great season on a losing team, why wouldn’t you trade him? If he’s having essentially a career year, isn’t his trade value at the highest it might ever be going forward?

Having said all of that, I’m left with a few questions.

The first: Will Neal Huntington & Co. recognize the need to tear it down or do they truly think they could contend again next year?

As I mentioned before, Huntington has been enamored with the idea of trying to contend now and in the future even when it might not make any sense, hence the 70-something win seasons.

The second: Does he truly have a grasp of the talent he has on his roster year to year? According to Ken Rosenthal, not all executives think he does.

The third: Can Huntington get the necessary pieces back for their assets to build a future winner?

I guess we’re left to wait and see.