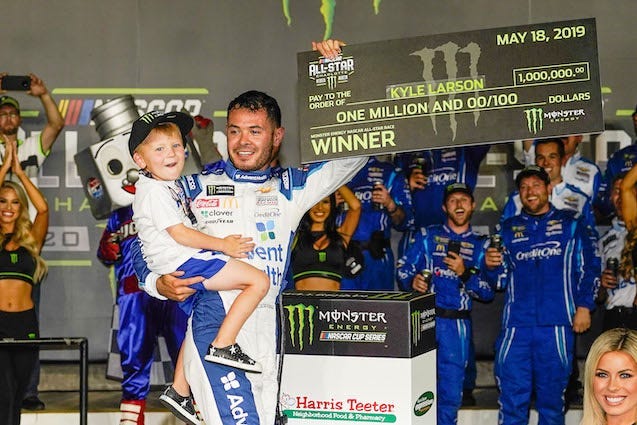 Larson had to win the Monster Energy Open earlier Saturday afternoon to even qualify for the race.

"This is unbelieveable," said an elated Larson in victory lane.  "The whole day was up and down from the B main we were in, to getting a little damage, to having to repair the car."

Larson got a monster restart with 12-laps left in the event when Kevin Harvick gave him a huge push to get past Kyle Busch and Chase Elliott off of turn 2.  Busch got behind Larson with Harvick chasing but Busch hit the turn 4 wall with 6-laps to go, leaving Harvick as Larson's closest pursuer.  He couldn't get to him and Larson's No. 42 Advent Health Chevrolet Camaro beat Harvick's No. 4 Busch Beer Ford Mustang by .322-seconds.

"Harvick gave me a heck of a push to get to the lead from the third row and that was huge," said Larson.  "I feel like every time I've been in the All-Star race I've been close to winning, so it's neat to finally close it out.  After the year we've had I would not have guessed that we'd get our first win at the All-Star race.  We always seem to run good this weekend.  So it just feels like a big relief to get a win."

Larson sits 15th in the Monster Energy NASCAR Cup Series points standings, 174-points behind leader Joey Logano.  Larson has only one top 5 finish this season and three DNF's (did not finish) so the victory is a big shot in the arm for Larson and the entire Ganassi team.

Harvick, who had one of the fastest cars all weekend, was not happy with second place after struggles on pit road.

"A letdown," said Harvick.  "That's how you take the fastest car and don't win the race with it.  It's just unfortunate the way that pit road went tonight because it wasn't even close to anybody having a good car like we had tonight."

While Harvick fumed on pit road, Clint Bowyer was fuming at Ryan Newman and after the race ran over to Newman's and starting throwing punches at the Roush Fenway Racing driver like "Rock 'em, Sock 'em Robots".

The Monster Energy NASCAR Cup Series gets back to points paying races next Sunday with the Coca-Cola 600.