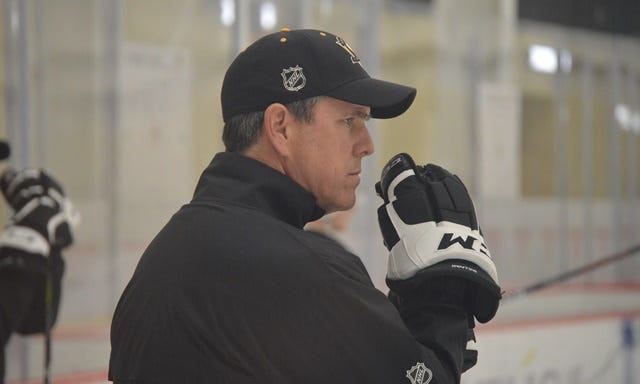 (CRANBERRY TWP, PA) 93.7 the Fan -  Pens will be without All-Star defenseman Kris Letang and Brian Dumoulin for Tuesday’s game with Columbus and then for an unknown amount of time.

Both were injured during Saturday’s game at Philadelphia as head coach Mike Sullivan said Letang will be evaluated day-to-day and no timetable given about Dumoulin’s injury.

“They are our top pairing,” said defenseman Marcus Pettersson.  “They are two of the most important guys on our team.  Any time you miss those guys you are going to miss them.”

“It happens, it’s tough to see three D men go down in such a short amount of time but we have guys that can come up and step in,” said defenseman Justin Schultz.

Immediately, the Pens will recall Zach Trotman from the minors, but likely start to lean on the two coming in the deadline deals on Monday, veterans Erik Gudbranson and Chris Wideman.

“I think we have to learn from some of the things we did in that game (Saturday),” Pettersson said of filling in for Letang and Dumoulin.  “As a team we kept the play in front of us and allowed us to establish a rhythm.”

Head coach Mike Sullivan believes he can use the experience with the four on Saturday and also lean on the forwards to help out with puck control.

“I think that’s when this team is at its best whether they (Dumoulin and Letang) are in our lineup or not,” Sullivan said.  “When we play a fast game, a north-south game.  We hang onto pucks into the offensive zone and force turnovers with our quickness and our puck pursuit and our stick detail.  I think that’s when our team is at its best and we’re going to need that aspect of our game.”

It’s also an opportunity for a guy like Chad Ruhwedel, who has been a healthy scratch for much of the season.

“Absolutely, it’s unfortunate that some guys get hurt, but it’s a part of the game,” Ruhwedel said.  “Everybody who steps in, in their place, will have to help the team.”