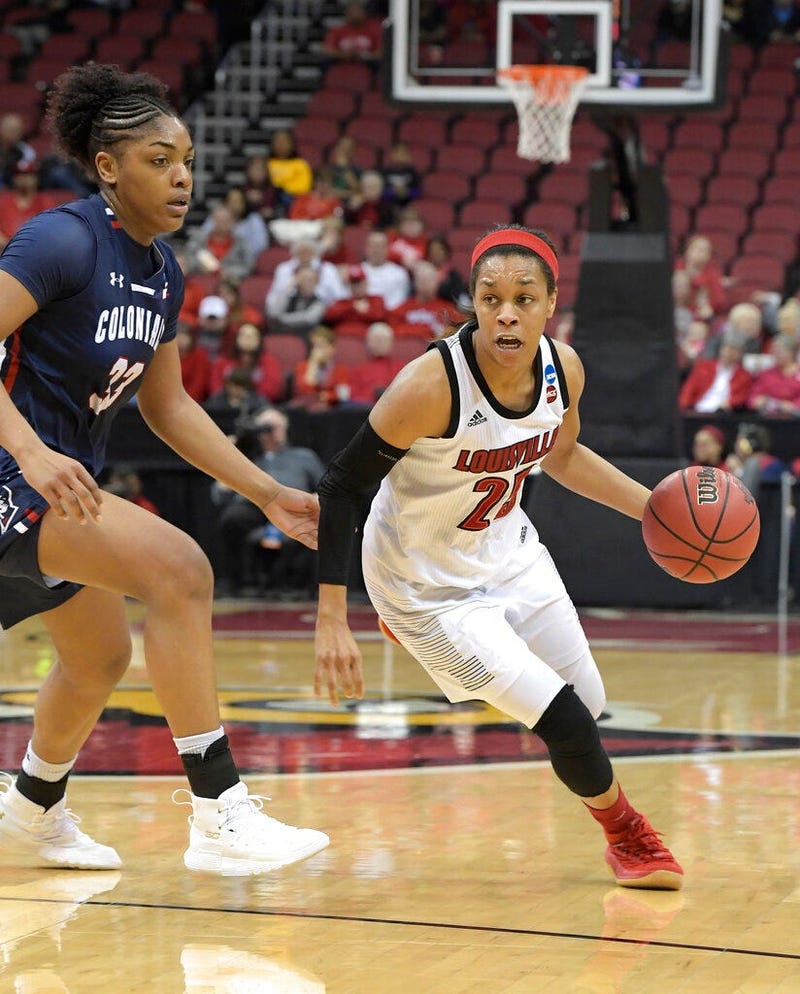 And with the Colonials missing shots for much of the first half, the Cardinals didn't really need that many baskets, either.

Asia Durr and Sam Fuehring each had 19 points, and top-seeded Louisville scored 27 straight points in the first half to overwhelm 16th-seeded Robert Morris 69-34 on Friday.

The absences of suspended coach Jeff Walz — who was disciplined a game for a profane sideline tirade during last year's Final Four — and injured point guard Arica Carter didn't affect the Cardinals (30-3). They led 32-4 early in the second quarter by holding the Colonials scoreless for nearly 15 minutes. Robert Morris (22-11) missed 17 consecutive shots during that drought before making three of five entering halftime, but the game was out of reach by then.

Though it wasn't Louisville's first time this season without Walz calling plays, this was the NCAA Tournament and the Cardinals are a No. 1 seed for the second consecutive spring. They ended up showing their depth, chemistry and execution.

"There was no pressure at all," said Durr, who was 6 of 12 from the field with three 3-pointers. "We have to coach ourselves. We did a great job of playing as a team. Our defense was really good. They (the Colonials) really didn't like the pressure. I think we took that next step. I'm very proud of our team."

Louisville also shot 48 percent in bouncing back from its Atlantic Coast Conference championship loss to Notre Dame. Fuehring made all nine shots from the field and grabbed 11 rebounds.

Dana Evans came off the bench to score 13 points and Bionca Dunham had 10 points and seven rebounds for Louisville, which outrebounded Robert Morris 47-28.

The Cardinals will face the winner between No. 8 seed Michigan and No. 9 Kansas State in the second round.

Natalie Villaflor had 13 points and Nneka Ezeigbo nine for the Colonials, who had won their last four games. Ezeigbo also had nine rebounds.

Though the outcome was essentially decided in the first quarter, Robert Morris kept pushing the ball and firing away until something fell. Irekpitan Ozzy-Momodu's layup with 3:37 remaining before halftime finally broke the scoreless stretch and was cheered by Louisville fans.

"We didn't get off to the best start finishing shots we normally make," Robert Morris coach Charlie Buscaglia said. "I'm proud of the way we finished the game, we never lacked effort going against Louisville."

Mykasa Robinson made her second start this season for Louisville and had three points, three assists and two points in 27 minutes. Forward Kylee Shook had five rebounds and four points in her first start. The Cardinals used 10 players despite missing Carter, who cheered teammates with her injured knee taped.

Robert Morris: The Colonials started OK with consecutive baskets by center Ezeigbo, the Northeast Conference Defensive Player of the Year and tournament MVP. In fact, they frequently created good looks and maintained a fast pace despite trailing big. The cold start was just too much to overcome as they finished 23 percent from the field and scored a season low in points.

Louisville: While the Cardinals weren't perfect by any stretch, they gave Walz something to like from the outside looking in. Acting coach Stephanie Norman was able to clear the bench before halftime, Fuehring appeared healed following an ankle injury and the Cardinals quickly seized opportunities to build a safe cushion throughout.

"Our team really, really played good defense," Norman said. "We got valuable minutes from a lot of people. It was a great (that) our young players could get experience early."