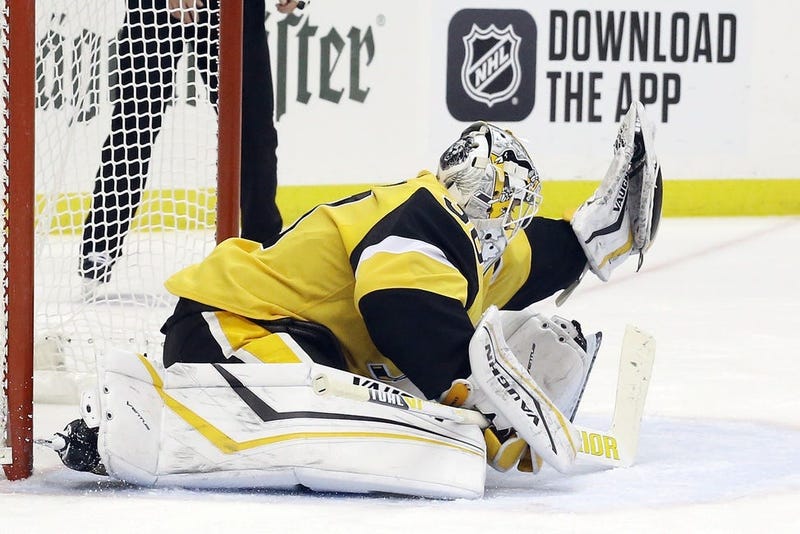 Pittsburgh (93.7 The Fan) - Goaltender Matt Murray is one of the quietest Penguins, but he had some interesting things to say about a couple of teammates, a former teammate and the NHL's most prolific goal scorer on Monday.  Murray participated in an NHL-produced video call along with fellow Stanley Cup champion goalies Braden Holtby of the Capitals and Jordan Binnington of the Blues.

It was another goalie--former teammate Marc Andre Fleury--about whom Murray spoke effusively.

"He was a great mentor to me and a great teammate to everybody," said Murray.  "I leaned on him a lot.  I can't say enough about what he meant for me in those first couple of years.  Just getting to watch him day in and day out, how he carried himself , how professional he was and how good he was, I was lucky to have a guy like that."

Murray also revealed that Alex Ovechkin's shot gives him more trouble than any other player's.

'It's like a knuckeball, honestly, " Murray said.  "Sometimes it drops a foot, a foot-and-a-half.  Sometimes it wobbles mid-air.  Sometimes it starts off going high glove-side and dips and curves like low-blocker.  It's crazy the movement he has on the shot, and the speed, too."

And Murray had this to say about facing Patric Hornqvist in practice.

"He's definitely always at the net-front, even in practice, and making your job difficult," Murray said. "But he's not really trying to get under your skin as much in practice as he would in games."

At that point, Holtby interjected "the problem is he apologizes after he (infuriates the goalie) every time."  Murray responded immediately.

Three weeks shy of turning 26, Murray is at his lakehouse in Ontario, working to stay sharp with the hope the season will resume.

"I've just been trying to stay in shape the best I can.  I'm not doing too much, just maybe throwing the tennis ball off the wall here and there. I'm just making sure that my body's ready for when we start back up again."

He closed with a message to Penguins fans.

"Keep staying patient.  We'll be back on the ice soon, and hopefully you'll be able to be there and cheer us on.  In the meantime,  everybody stay safe and health, and we'll see you guys soon."