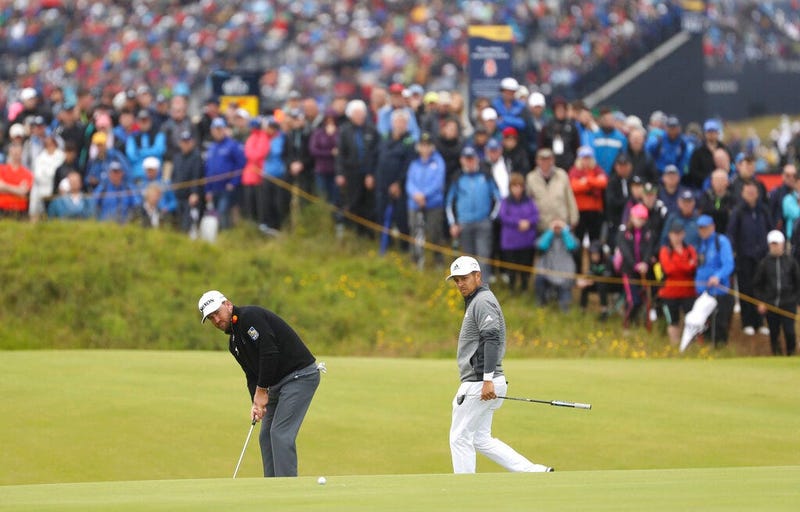 PORTRUSH, Northern Ireland (AP) — A quadruple-bogey 8 at the first hole might not have been the most embarrassing part of Rory McIlroy's wild opening round at the British Open.

Three-putting from 4 feet for a double at the par-3 16th also left the Northern Irishman shaking his head, and another double at No. 18 saw him stumble home for an 8-over 79. It tied his worst first round at the British Open.

McIlroy was 12 strokes off the lead, his major drought almost certainly extending to a sixth year.

Tiger Woods got up and down from a greenside bunker to make par on his opening hole as rain returned to Royal Portrush.

Shane Lowry remained in sole possession of the clubhouse lead at 4 under.

Jordan Spieth was only a shot behind making three birdies in his first five holes.

Graeme McDowell had to wipe a tear from his eye when he teed off in his hometown at the British Open.

That gave way to frustration at the end of his round.

McDowell, born and raised in Portrush and a member at adjacent Rathmore Golf Club, was one shot out of the early lead when he three-putted for bogey on the 15th and dropped another shot on the 17th. Then, he sent his drive well to the right on the 18th hole into grass so thick that he never found the golf ball in the three minutes allowed for the search.

He went back to the tee for his third shot and missed a 7-foot putt to take triple bogey.

On the leaderboard for so much of his round, he signed for a 73.

Shane Lowry has set the early target in the British Open with a 4-under 67, eight shots lower than his best opening round in the other three majors this year. And making it extra special was doing it on Irish soil.

Among those one shot behind was Dylan Frittelli, the last man to qualify for the Open by winning the John Deere Classic. He was joined by Sergio Garcia, Webb Simpson and Alex Noren, along with another player who might need some introduction.

Bob MacIntyre of Scotland made it into his first Open with a pair of runner-up finishes on the European Tour this year to get into the top 20 in the points list. He has one career victory since turning pro. That was two years ago at the Sahara Kuwait Golf Championship on the MENA Tour, which stands for Middle East North Africa.

MacIntyre was tied with Lowry until a bogey on the final hole. Still, it was an impressive debut.