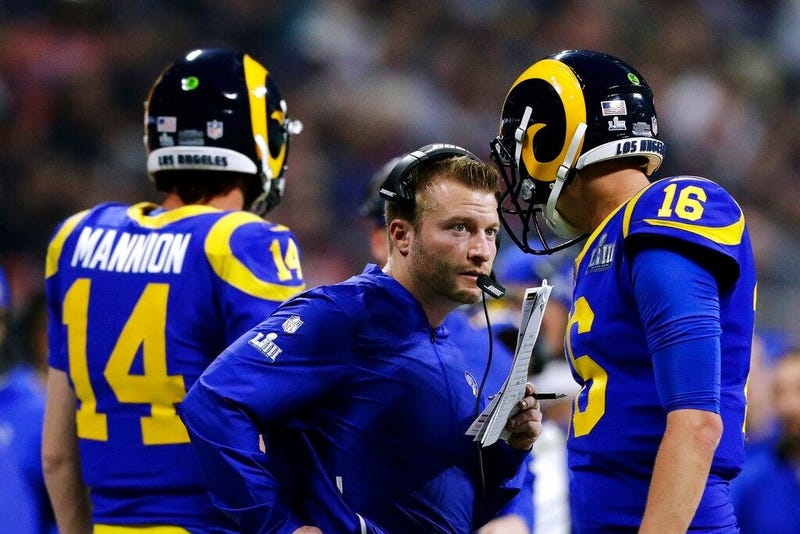 ATLANTA (AP) — Sean McVay has had very few bad days during his two seasons in charge of the Los Angeles Rams. His coaching tenure had been a rocket ride all the way to the Super Bowl.

Until Bill Belichick sent this bright football mind and his exciting team plummeting back to Earth.

What McVay does about it will determine whether the Rams are still an ascending powerhouse or another NFL contender broken by the New England Patriots.

After Belichick's defense turned McVay's offense into the worst version anyone had ever seen, the Rams' 33-year-old offensive guru was visibly frustrated and embarrassed. His clenched jaw in postgame interviews also signified a determination to never let it happen again.

"The thing that is so tough about all of this is the finality to it," McVay said Sunday night after his Rams failed to score a touchdown for only the second time in his 36 games in charge. "Usually, if you go through some adversity, you get a chance to bounce back right away. This one is going to stick with you. It just stings in your gut. I'm still kind of numb right now, but I have so much love for these players and these coaches. That's where it really eats at you, because you feel like you didn't do your part to help them achieve success.

"This is going to be a very humbling, tough one that you learn from. But you have to demonstrate that mental toughness you talk about, and that is all I know how to do."

McVay could have been speaking partly to convince himself after he coached only the second team in 53 Super Bowls to fail to score a touchdown. The wunderkind's confidence appeared to be shaken to its core by a New England defense that held the 11th highest-scoring team in NFL history to 260 total yards, six first downs in the first three quarters and their fewest points in McVay's era.

"It's embarrassing," left tackle Andrew Whitworth said. "It stings to play that way. You'd almost rather score a ton and lose that way, but that would take away from what the defense did. They gave us every opportunity to win."

McVay thrives on X's and O's, and he will have six months to scheme new ways to attack the similar zone defenses used late in the year by Detroit, Chicago and New England to throttle the Rams' passing game. He also will endeavor to teach Jared Goff to make better decisions under pressure after the young quarterback's stinker of a Super Bowl .

General manager Les Snead has big calls to make on soon-to-be free agents and roster vacancies. The Rams will return with a wealth of talent, but they must determine whether their 4-3 record in their final seven games was a sign of bigger flaws.

Financially speaking, the Rams' championship window remains wide open for at least one more season before Goff likely gets a significant raise and consumes a larger chunk of their cap space in 2020. They can deal with their disappointment by adding players, not culling them — and after the bold moves of the last offseason, there is no reason to suspect the Rams won't go all in again in 2019.

Although the Rams are hurting, a franchise with 13 consecutive non-winning seasons before McVay arrived is not likely to panic over one Super Bowl setback, particularly since much of its core — running back Todd Gurley, two-time Defensive Player of the Year Aaron Donald and 1,200-yard receivers Brandin Cooks and Robert Woods — is locked into place with long-term deals.

"The first thing (Super Bowl MVP) Julian Edelman said to me when I was congratulated him after the game was, 'You guys are going to be really good for a long time,'" Whitworth said.

Although Suh loves living in LA and got his first career playoff victory this season, he likely could make more money elsewhere. The Rams must think about using the franchise tag on Fowler, who clearly would like to stay.

"We'll be ready next year," Fowler said after the Super Bowl.

They also will await a decision by Whitworth, the oldest offensive lineman in the NFL. The 37-year-old left tackle still plays superbly, but he has not committed to returning for the third season of his contract, saying Sunday he will "see how the offseason plays out."

While the defense could require several changes, the fate of the Rams' stalwart offensive line is a key. No starter has missed a game due to injury in McVay's two seasons, but center John Sullivan will be 34 and Saffold will be 31 by training camp. After another stellar season, Saffold could be expensive to keep.

No matter the changes, the Rams' returning players will carry the motivation of this Super Bowl loss — and so will McVay, who sees no end to his work after two wildly successful seasons.

"There is no other way to say it," McVay said. "I got outcoached."