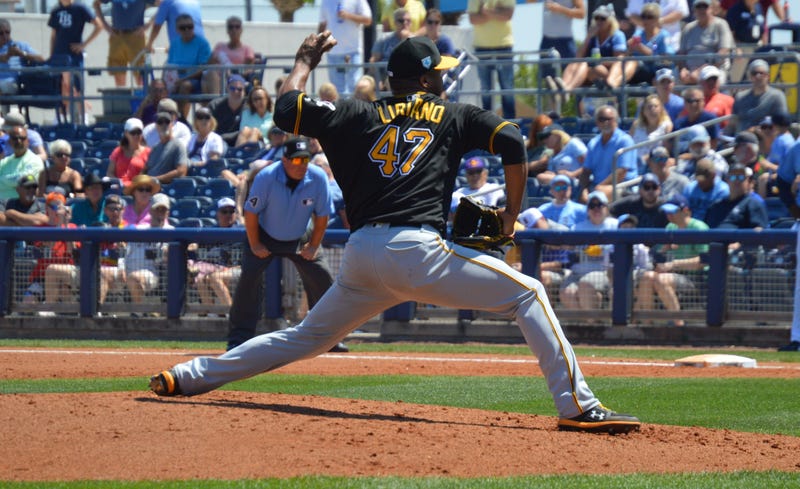 BRADENTON, FL (93.7 the Fan) – With a deadline on Saturday, the Pirates have committed to keeping lefty pitcher Francisco Liriano and outfielder Melky Cabrera on the roster.  That in turn means the Pirates will have to make decisions on the 40-man roster, but not until Thursday.

An easy decision will be putting Edgar Santana on the 60-day disabled list after Tommy John surgery and then another move will have to be made.  A lot can sort itself out between now and then with a trade or injury.

“We still saw the velocity, the action of the slider and change-up,” said GM Neal Huntington.  “Even as a starter last year had some elements of success.  Still has weapons versus left-handers and can give us multiple innings out of the pen if need be.  Great veteran presence and maturity and great add to the clubhouse.”

Now a reliever, Liriano has worked in nine Grapefruit League games, allowing earned runs in three of the outings with an overall ERA of 4.66 with nine walks and eight strikeouts.

“Just very happy to be a part of the team, being back here in Pittsburgh, it’s a huge step for me,” Liriano said, admitting he was nervous yesterday waiting for a decision and found it hard to sleep last night.  “I like to compete, I like to win.  It looks good for this year, I believe we are going to win.”

Liriano, who will make 1.8 million, said he’s still not where he wants to be, it’s taken him a couple of weeks to get his pitches going.  Moving to the bullpen, Liriano says he knows you have to come ready to attack hitters and not get behind in counts.

“The coaches, the guys I played with before, the city,” Liriano said of signing with the Pirates.  “I have a great time here with great memories and just feel comfortable here.

“He has pitched the most important game in Pittsburgh in quite a few years,” Huntington said.  “Has been a part of that and remembers what it was when we were good.  And has been other places where it’s been good.”

Cabrera is 34 and will make 1.15 million.  He likely can only play right field at PNC Park and then left or right field on the road, although Cabrera says he feels great about his defense.

He’s a switch-hitter with a career .286 average over 1754 games and last year hit six homers and drove in 39 runs in 78 games with Cleveland.

“I was very glad to receive the news from the manager that I made the team,” Cabrera.  “I got really excited.  I’m excited to be a help to this team and help them win.”

“Solid, steady, professional bat,” Huntington said of Cabrera.  “He Can get his hits from the right and left side, another guy who brings a veteran presence to a relatively inexperienced club.  A veteran bat off the bench which managers always love and the value is he can hit left-handers and right-handers.  Will be adequate in the outfield and do his best on the bases to be a productive player.  It’s the bat, it’s a veteran bat.”

Hitting .310 this spring, three of his 13 hits have been for extra bases, all doubles.  Cabrera says he feels his experience can help this team win a World Series title

“This is a good team, a good young team,” Cabrera said.  “We have a good lineup when it comes to Corey Dickerson, Marte, Polanco and all those guys.  Our bullpen is very strong, more than anything I believe we have two of the best catchers in the league.”