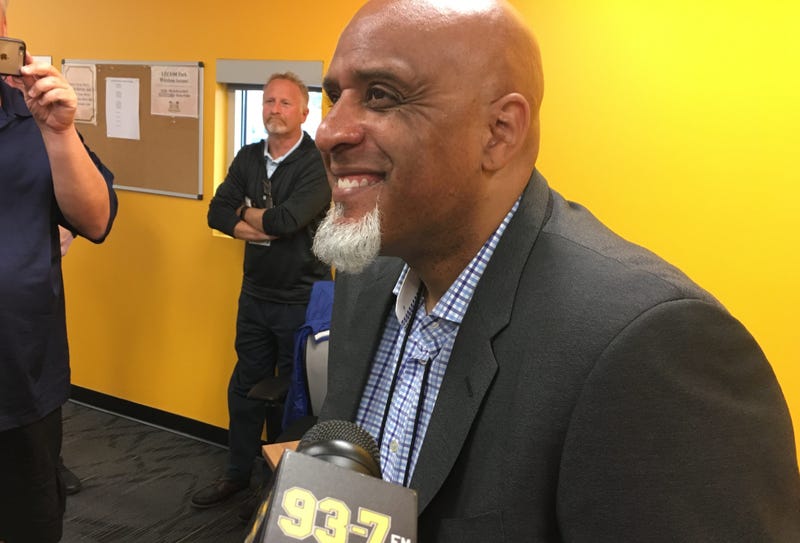 BRADENTON, FL (93.7 the Fan) – MLB Players Association Executive Director Tony Clark met with Pirates players on Tuesday saying, as he meets with teams across Florida and Arizona, he is finding an engaged group of connected players anxious to fix their issues with the game.

“In an industry that’s growing, seeing upwards of two-thirds of the payrolls being lower than what they were last year is a concern,” Clark said.

And while it is about individual teams, it’s also about individual players.  Notably stars like Boston free-agent closer Craig Kimbrel and Astros starter Dallas Kuechel who are not be able to find what they consider fair contracts.  Or even players like Josh Harrison who signed late for just two million over a season.

“It is frustrating for me,” Clark said.  “It is disheartening as a fan knowing that those players are sitting home and they can help my team win.  Why have we not, perhaps, engaged them and tried to determine whether there was an opportunity to bring them in to help us.”

“I know I’m beating a dead horse here, but to the extent that it is best for the entire industry to make sure that our best players are on the field, have jobs in stadiums at the ballparks so fans can appreciate what we’ve throughout our history largely been able to appreciate and that is coming to the ballpark and seeing the best players play this game.”

Clark also said the players are concerned about creating an atmosphere of competition across the board, that having an industry that has the best players on the field, whether you are a more veteran player or a young player.  That, obviously, deals with claims that teams manipulate service time.

Then there is the concern about teams dumping payroll in what is believed to be an attempt to save money now, and then spend when the time is right.  A practice the Astros used and went on to win a World Series.

“We’ve understood – we’ve always understood – that there has been a team or two or three that re-cycles,” Clark said.  “What we’ve seen goes much deeper and broader than that and therefore offers a concern to us that we believe needs to be addressed sooner rather than later and it’s not sustainable for the industry to continue to function in that fashion."

The players union chief says you won’t find a player that is interested in playing three-and-a-half to four hour games and they will continue to do their part to keep the games moving.

“We think the attendance issues have less to do with three hours versus 3:05 and more to do with some underlying, far more fundamental issues,” Clark said.

The MLBPA confirmed the grievance filed against the Pirates and three other teams last year, that neither the Bucs, Marlins, A’s and Rays have spent the revenue-sharing money in the fashion intended by the collective bargaining agreement, is still ongoing.