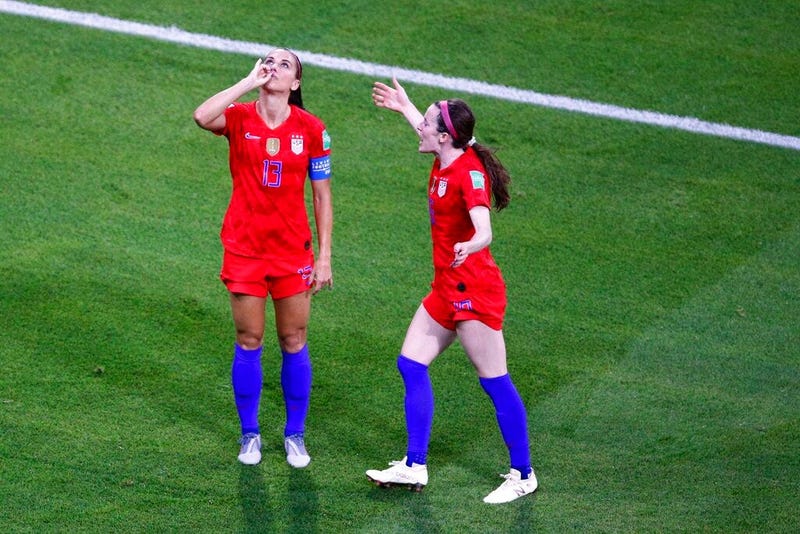 No, it wasn't a dig at England or a random reference to the Boston Tea Party, or any number of other theories out there.

"My celebration was actually more 'that's the tea,' which is telling a story, spreading news," the U.S. forward said.

Morgan has been criticized for the celebration. Her former teammate on the Orlando Pride, Lianne Sanderson, a broadcast commentator during the World Cup for beIN Sports, called the celebration "distasteful."

"She can celebrate however she wants and I'm a big believer in the Americans and how they celebrate but this was disrespectful," said Sanderson, a former striker for England's national team.

The victory sent the Americans into their third consecutive World Cup final. They'll face the Netherlands for the championship on Sunday at Stade de Lyon.

Morgan spoke to reporters Friday, clarifying the source of the goal celebration and referencing the "Game of Thrones" actress. Turner's Instagram is filled with her saying audacious or gossipy things, adding "That's the tea" and taking a sip.

"I feel that there is some sort of double standard for females in sports to feel like we have to be humble in our successes and have to celebrate but not too much, or do something but always in a limited fashion," Morgan said.

She said it's hard to understand the outrage when men have celebrated goals by grabbing their crotches.

The U.S. national team has drawn some criticism for its goal celebrations in France. First it was the repeated celebrations after every goal in a 13-0 rout of Thailand, which some said were unsportsmanlike. Carli Lloyd responded in the next game with a golf clap after her goal.

Megan Rapinoe struck an "Are you not entertained?" pose in the quarterfinals against France before Morgan's tea sipping in the semis.

"I think everybody's just kind of having fun with the celebrations and embracing the moment," Lloyd said.

Yorkshire Tea company made light of Morgan's celebration, tweeting a photo of a bag of team readied for shipping.

"Dear @USWNT, Sorry you had to drink pretend tea. If you'd run out of the proper stuff, you only had to ask! PS No hard feelings - good luck on Sunday."