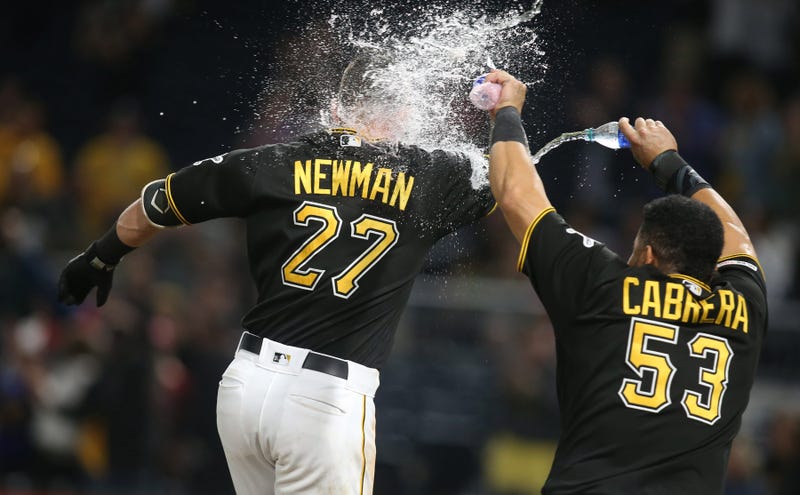 PITTSBURGH (93.7 The Fan) - Pittsburgh Pirates Shortstop Kevin Newman hit a 3-run home run in the 5th inning and with two outs in the bottom of the 9th and a runner on 3rd, Newman puts his second home run of the night into the left field bleachers to walk it off and defeat the Cincinnati Reds 6-5 at PNC Park Friday night.

"It was a little up and down, but I think overall it seemed like when I walk people they score, I gave up 4 walks and I gave up 4 runs. It seems to be the rule for me, so reduce the walks reduce the runs, " said Brualt. "Overall I felt good, I just wanted to go out there tonight and give everything I had. Instead of trying to focus on being perfect, I wanted to focus on being me. So, tonight even though the stat line isn't exactly perfect, I think that what it shows is that moving into the off-season I know that I'm going to work on not trying to be somebody else, but trying to be the best version of me that I can be. I'm excited to see what we can do as a team next year and I how I can improve as well."

Cincinnati would have a 4-0 lead heading into the bottom of the fourth inning, but Erik Gonzalez and Steven Brault would lead off the bottom half of the inning with back to back singles and Kevin Newman would cut the Pirates deficit to 1 after hitting a 3-run home run into the bleachers in left field.

With his single in the fourth inning, Gonzalez extends his hitting streak to a career high 11 games.

Pittsburgh would end up tying the game at 4 in the bottom of the six when they had runners on the corners with one out and Gonzalez would line out to second base, but Jose Peraza would throw to first to try and double up Jacob Stallings, but the ball would get away from the Reds first baseman and Kevin Kramer would score from third.

Michael Lorenzen started the game in centerfield for the Reds, came in and pitched two scoreless innings and gave Cincinnati a one run lead with an RBI single in the top of the 8th inning.

The Reds are have been very creative in how they use Lorenzen this year out of the bullpen and in centerfield and in the clubhouse postgame we learned that the Pirates are discussing how they can use Brault as a two way player.

It is also Steve Blass Day at PNC Park as the pregame festivities honoring Steve Blass for his 60 years with the organization will start at 6:40 pm.