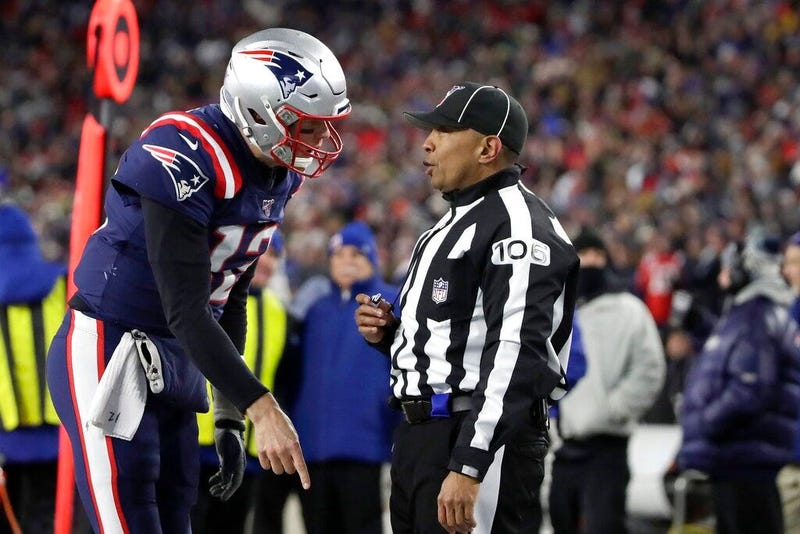 (AP) Anyone who's watched the New England Patriots stumble around for the past month or so surely saw this coming.

With every wobbly pass delivered by Tom Brady, every disgusted look coming from beneath Bill Belichick's hoodie, every result that went on the wrong side of New England's won-loss ledger, it was clear the team that brought us Spygate and Deflategate would be looking for another illicit edge to swing things back in their favor.

Ladies and gentlemen, we bring you Spygate 2.0.

The Patriots have admitted that one of their production teams filmed the Cincinnati Bengals sideline during Sunday's game at Cleveland, supposedly for a Web series known as “Do Your Job” but sounding much better suited for an episode of “Know Your History.”

Back in 2007, New England was caught doing much the same thing when team workers videotaped an opposing team's signals to ensure the Patriots play-calling would come a whole lot easier on game day.

That little ethical lapse cost the Patriots a first-round draft pick and a quarter of a million dollars, not to mention a half-million-dollar withdrawal from Belichick's bank account.

At this point, we can only assume Martin Scorsese is a full-time member of the coaching staff. When they teach film history in the years to come, they'll need to make mention of New England's ample contributions, maybe sandwiched somewhere between "Citizen Kane” and cinéma vérité.

Of course, let's not forget another charming little scandal that took us all back to science class. That time around, the Patriots were accused of illegally deflating the footballs used in the 2015 AFC championship game, supposedly to make them easier for Brady to grip and throw on a nasty day.

The NFL came down hard on the Patriots in that one, too, handing Brady a four-game suspension, fining the team $1 million and snatching away another first-round pick.

Belichick got on a conference call Tuesday to deny any wrongdoing on his part, saying he had not even seen the film that was shot by a three-person crew and is now in the hands of the league office for yet another investigation into alleged cheating by the Patriots (at this point, we assume, they have a whole department dedicated to that task).

"I personally have never viewed any video footage at all, anything that those production people have done, other than what’s shown on public television or something like that," Belichick said.

Given his track record, those eyes you see rolling are from everyone who lives beyond the six little states in the nation's top right corner — especially since the Patriots were caught filming the team they play next.

Sorry, we're not buying that one of the greatest control freaks in NFL history knew nothing about any of this, that it was simply another case of a rogue film crew going off and doing its own thing.

Belichick's supporters will undoubtedly suggest there was no reason to film the lowly Bengals (1-12), unless if was for a documentary on how not to run at NFL team.

But we don't put it past Belichick to leave anything to chance — especially the way his team has been playing.

Coming off their sixth Super Bowl title and third straight appearance in the big game, the Patriots cruised through the first half of the season with eight straight wins.

It looked as though their main chore the rest of the way would be getting everyone fitted for another gaudy ring.

Then, all of a sudden, the Patriots looked old and vulnerable and not the least bit intimidating.

They've lost three of their last five games to cede control of the race for home-field advantage in the AFC to Lamar Jackson and the brash young Baltimore Ravens.

It was the Ravens who actually started New England's slide, romping to a 37-20 victory in Week 9. After a bye week, the Patriots bounced back with a pair of lackluster victories: 17-10 over Philadelphia, 13-9 over Dallas, barely beating two of the NFL's most disappointing teams, that are a combined 12-14 on the season.

Then came a 28-22 loss at Houston, followed by a 23-16 setback to Kansas City in Foxborough, snapping a franchise record-tying streak of 21 straight home wins.

For New England fans the most troubling aspect of the recent woes has been Brady's play.

Tom Terrific now looks very much like a 42-year-old quarterback whose fountain of youth finally dried up, a reminder of an aging Willie Mays sadly stumbling toward home plate, or a washed-up Muhammad Ali using his face to defend himself from Larry Holmes' punches.

Brady is the 21st-rated passer among the league's 32 starting quarterbacks, sandwiched between a couple of neophytes — Arizona rookie Kyler Murray and second-year Buffalo signal-caller Josh Allen — and on pace for his lowest-rated season since 2008.

“We've just got to go out and try to play better, try to win next week's game," Brady said. “It's disappointing, but we're not going to feel sorry for ourselves."

In a statement posted on Twitter and the team website Monday night, the Patriots said their film crew was putting together a feature on the work that advance scouts do while on the road.

Naturally, the Patriots thought the best way to make their home-made movie was to film the next team on their schedule, making sure to get their credentials from the Browns while not bothering to inform the Bengals they were there.

According to the statement, that was “an unintended oversight.”

We call that one downright laughable.

The NFL should consider the source when it considers whether to punish the Patriots again. Clearly, this franchise has learned nothing from its previous missteps.

This time around, the Patriots should lose at least two first-round picks. Another hefty fine is meaningless, so how about a lengthy suspension for the man who controls everything that goes on in that organization.

Coach Belichick, take the rest of the year off.

You could use all that free time to teach a class at the local college.

Call it “Techniques in Secret Film-making 101."

Paul Newberry is a sports columnist for The Associated Press. Write to him at pnewberry(at)ap.org or at www.twitter.com/pnewberry1963 His work can be found at https://apnews.com